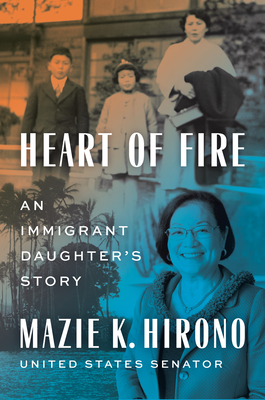 “Amazing . . . a memoir I really loved.” —Secretary Hillary Clinton, “You and Me Both” podcast

The intimate and inspiring life story of Mazie Hirono, the first Asian-American woman and the only immigrant serving in the U.S. Senate

Mazie Hirono is one of the most fiercely outspoken Democrats in Congress, but her journey to the U.S. Senate was far from likely. Raised on a rice farm in rural Japan, she was seven years old when her mother, Laura, left her abusive husband and sailed with her two elder children to Hawaii, crossing the Pacific in steerage in search of a better life. Though the girl then known as "Keiko" did not speak or read English when she entered first grade, she would go on to serve as a state representative and as Hawaii's lieutenant governor before winning election to Congress in 2006.

In this deeply personal memoir, Hirono traces her remarkable life from her earliest days in Hawaii, when the family lived in a single room in a Honolulu boarding house while her mother worked two jobs to keep them afloat, to her emergence as a highly effective legislator whose determination to help the most vulnerable was grounded in her own experiences of economic insecurity, lack of healthcare access, and family separation. Finally, it chronicles Hirono's recent transformation from dogged yet soft-spoken public servant into the frank and fiery advocate we know her as today.

For the vast majority of Mazie Hirono's five decades in public service, even as she fought for the causes she believed in, she strove to remain polite and reserved. Steeped in the nonconfrontational cultures of Japan and Hawaii, and aware of the expectations of women in politics--chiefly, that they should never show an excess of emotion—she had schooled herself to bite her tongue, even as her male colleagues continually underestimated her. After the 2016 election, however, she could moderate herself no longer. In the face of a dangerous administration--and amid crucial battles with lasting implications for our democracy, from the Kavanaugh hearings to the impeachment trial--Senator Hirono was called to give voice to the fire that had always been inside her.

The compelling and moving account of a woman coming into her own power over the course of a lifetime in public service, and of the mother whose courageous choices made her life possible, Heart of Fire is the story of a uniquely American journey, told by one of those fighting hardest to ensure that a story like hers is still possible in this country.
Senator Mazie K. Hirono is a graduate of the University of Hawaii, Manoa and the Georgetown University Law Center. She has served in the Hawaii House of Representatives (1981-1994), as Hawaii's lieutenant governor (1994-2002), and in the U.S. House of Representatives (2006-2013). She became Hawaii's first female senator in 2013, winning reelection in 2018. Hirono serves on the Committee on the Judiciary, the Committee on Armed Services, and the Committee on Energy and Natural Resources, among others.

“[A] multigenerational tale...built around her political and feminist awakening…most powerfully, Heart of Fire is about Hirono’s growing determination to loosen her tongue.” —Rebecca Traister, The Cut

“[A] courageous and vivid depiction of growing up in Hawaii as a poor immigrant.” —The Washington Post

“[A] book unique among those by politicians, written more in the tone of a late-night conversation between two close friends, or a journal entry, than a town hall or stump speech.” —Politico

“By no means does Hirono present her story as just one victory after another, or as simply a political parable. She tells amusing stories about her foibles . . . [and] confesses to setbacks in her love life . . . Grit is the through line of Heart of Fire.” —San Francisco Chronicle

“There are odysseys, and then there’s the epic journey of Senator Hirono...This sparkling, revelatory memoir insists that the personal is always political.” —Oprah Daily

“Candid, courageous and inspirational, this memoir tells a crucial story of the U.S. at its best.” ­—Ms. Magazine

“At first glance, Heart of Fire is a political memoir. At its core, it's an ode to a mother who changed her daughter's life.” —Marie Claire

“The powerful story of an immigrant family and how they held together through poverty; xenophobia; and abuse as they pursued American ideals of equality, justice, and freedom…One of the most inspiring and authentic political memoirs…of recent years.” —New York Journal of Books

“One of the finest political memoirs in the history of the genre . . . An astoundingly compelling glance into U.S. politics . . . [and] an honest look at how much grit it takes for people from less privileged backgrounds to make it in American politics . . . A must-read.” —Library Journal, Starred Review

“A gripping read . . . Hirono is fierce and forthright as she shares the life experiences that led to her becoming a U.S. senator . . . While Hirono’s ideological evolution over the various stages of her political life is fascinating, her grit and determination make this a motivating story even for those who are not ordinarily interested in politics.” —Booklist

“With both ferocity and compassion, Hirono chronicles her experiences in Congress, exposing the rampant hypocrisy and illogical behavior she has witnessed. At the same time, warmth and love shine through, as she attributes her success and determination to the example set by her mother. A heartfelt and fiery political memoir and immigrant story.” —Kirkus Reviews

“Heart of Fire is an urgent read for a nation in need of healing, inspiration and introspection. It vividly captures Mazie Hirono’s journey to the Senate, which is both strikingly unique and yet speaks to compelling universal spiritual themes. A profound testimony to the glorious possibility that is our nation, this important book is a gift to the reader, just as Mazie’s life of breaking barriers and her leadership as a champion of the people continue to be gifts to all Americans.” —Cory Booker, United States Senator and New York Times bestselling author of United

“If a life can be called implausible, Mazie Hirono has lived it. In Heart of Fire, she tells an astonishingly compelling story. As a child born in postwar Japan, she crossed an ocean with her brother and mother, grew up in poverty in paradisiacal Hawaii, and emerged as a fiery voice and agent of change in the male-dominated, rough-and-tumble worlds of American politics. Powerful, poignant, and beautifully told, Heart of Fire is her inspiring, singular story.” —George Takei, New York Times bestselling author of They Called Us Enemy