Don't Let It Get You Down: Essays on Race, Gender, and the Body (Hardcover) 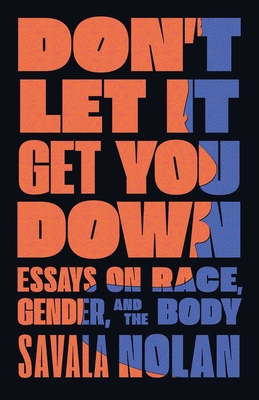 Don't Let It Get You Down: Essays on Race, Gender, and the Body (Hardcover)


Usually Available/Ships Within 1 Week
A powerful and provocative collection of essays that offers poignant reflections on living between society’s most charged, politicized, and intractably polar spaces—between black and white, rich and poor, thin and fat.

Savala Nolan knows what it means to live in the in-between. Descended from a Black and Mexican father and a white mother, Nolan’s mixed-race identity is obvious, for better and worse. At her mother’s encouragement, she began her first diet at the age of three and has been both fat and painfully thin throughout her life. She has experienced both the discomfort of generational poverty and the ease of wealth and privilege.

It is these liminal spaces—of race, class, and body type—that the essays in Don’t Let It Get You Down excavate, presenting a clear and nuanced understanding of our society’s most intractable points of tension. The twelve essays that comprise this collection are rich with unforgettable anecdotes and are as humorous and as full of Nolan’s appetites as they are of anxieties. The result is lyrical and magnetic.

In “On Dating White Guys While Me,” Nolan realizes her early romantic pursuits of rich, preppy white guys weren’t about preference, but about self-erasure. In the titular essay “Don’t Let it Get You Down,” we traverse the cyclical richness and sorrow of being Black in America as Black children face police brutality, “large Black females” encounter unique stigma, and Black men carry the weight of other people’s fear. In “Bad Education,” we see how women learn to internalize rage and accept violence in order to participate in our culture. And in “To Wit and Also” we meet Filliss, Grace, and Peggy, the enslaved women owned by Nolan’s white ancestors, reckoning with the knowledge that America’s original sin lives intimately within our present stories. Over and over again, Nolan reminds us that our true identities are often most authentically lived not in the black and white, but in the grey of the in-between.

Perfect for fans of Heavy by Kiese Laymon and Bad Feminist by Roxane Gay, Don’t Let It Get You Down delivers an essential perspective on race, class, bodies, and gender in America today.
Savala Nolan is an essayist and director of the Thelton E. Henderson Center for Social Justice at the University of California, Berkeley, School of Law. She and her writing have been featured in Vogue, Time, Harper’s Magazine, The New York Times Book Review, NPR, and more. She lives in the San Francisco Bay Area.

“The essays in Savala Nolan’s first collection, Don’t Let It Get You Down, unfold out of her complex relationship with being a big-bodied, mixed-race Black woman...Nolan is writing into a long tradition, and its contemporary renaissance. From Du Bois’s The Souls of Black Folk to slave narratives, the Black essay is rich with stories of otherness and duality. Writers like Clint Smith, Emily Bernard, Nishta J. Mehra, Ta-Nehisi Coates, Claudia Rankine, Mychal Denzel Smith and Robert Jones Jr. bring the modern essay form to bear as much on how the experiences of Blackness differ as they do on how they cohere. This embrace of the heterogeneity of Black womanhood is part of this book’s charm. Vulnerable, but rarely veering into self-indulgence…it is a brutal, beautifully rendered narrative. A standout collection.”
—New York Times Book Review

“Savala Nolan is powerful and complex...Like Ta-Nehisi Coates’ Between the World and Me, Nolan’s essays speak to both young and old Americans about our country’s pervasive history of racism.”
—BookPage, starred review

“It takes temerity to tell this kind of truth, to be unbowed by one's own trepidation. Savala Nolan does so boldly, and this book will help so many Black women to get free.”
—Brittney Cooper, New York Times bestselling author of Eloquent Rage

"In these thrilling essays, built with one blazing, breathtaking sentence after another, Savala Nolan takes us from the personal to the political and back again as she explores her fascinating range of experiences as a Black American woman. Authoritative, honest, and often bitingly humorous, Don’t Let It Get You Down is a book for our time and every time. It is not a book to read; it is a book to savor."
—Emily Bernard, author of Black is the Body

“In this woven tapestry of stories and histories of race, gender, class, and the body, Savala Nolan gives readers a deeply personal insight into what it feels like to hold identities that are seen as ‘other’ in dominant culture. For those of us who feel like ‘in-betweeners’ this powerful collection of poetic essays offers a place to be seen and to be heard in the fullness of our beautiful complexities. In reading Savala’s words as she travels to understand her experiences, and free herself from the parts that oppress, I found myself saying, 'Wow. Yes. Me too.'”
—Layla F. Saad, author of New York Times bestseller Me and White Supremacy

“In gorgeous prose and with profound clarity, Savala Nolan reckons with the interconnected oppressions, external and internalized, that have burdened her body: Anti-blackness, fat phobia, colonialism, and patriarchy. Don’t Let it Get You Down is vital reading for all of us working to bust out of boxes, binaries, silences, and shame.”
—Nadia Owusu, author of Aftershocks

“Savala Nolan deals a blow to the hollow—and very white—rhetoric of the body positivity movement with her essay collection, offering up her own stories of living in a body that are nuanced and warm, funny and painful.”
—Marisa Meltzer, author of This is Big

“In twelve probing essays, Savala Nolan explores her intersectionality of race, gender and body awareness with an unflinching honesty that is both revelatory and unsettling. The essays are personal and confessional but informed by an awareness of larger historical narratives rooted in American culture. Nolan’s essays on gender are critical continuations of conversations most recently shaped by writers such as Brittney Cooper and Roxane Gay…At the heart of the book is Nolan’s insistence that she must firmly stand in her truth and not be roped into needlessly debating it.”
—San Francisco Chronicle

"An eloquently provocative memoir in essays...This fierce and intelligent book is important not just for how it celebrates hard-won pride in one’s identity, but also for how Nolan articulates the complicated—and too often overlooked—nature of personal and cultural in-betweenness."
—Kirkus Reviews

"[A] book of vulnerable yet voluable personal essays on weight and multiracial identity...Nolan's writing on identity and self-worth is captivating from start to finish; her words will resonate long after the last page."
—Library Journal, starred review

"Sharp, moving reflections on never fitting neatly into a box. Don't Let It Get You Down is necessary intersectional reading on race, class, gender, wealth, identity, and body image."
—HelloGiggles

"It is a heavy book that takes aim at many of the issues facing so many people (and, in particular, Black women) today, but it is also a book that contains moments of pure joy, laughter, and insight. Not only is Don’t Let It Get You Down an important read, but it is also a delightful one that shows just how multitalented and impressive the author is when taking on subjects that resonate inside of her but also in the bodies and minds of her readers as well."
—Shondaland

“The twelve essays are fiercely personal, confessional even, less concerned with the collective than her own origin story, which is both unique and reassuringly typical…[Nolan] is witty and gently self-deprecating, well positioned to wonder at the fault lines in our culture.”
—Arkansas Democrat Gazette

"A searing, unsettling, beautiful set of investigations deep into her own mind, body, and personal history. This is a book about love, friendship, family and freedom—and the deep discomfort that can exist within those simple words. A riveting, difficult work written with rhythm and artistry."
—Alexis Madrigal, KQED

“Savala Nolan’s voice is one that deserves to be heard in all its vulnerability and complexity.”
—BookRiot