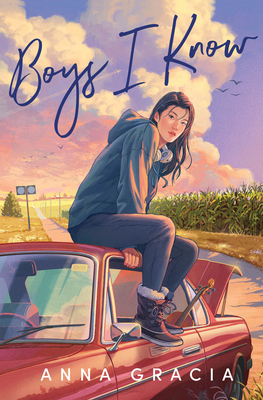 “June’s always felt she wasn’t good enough, and validates her worth via really poor choices in boys. These choices lead to painful realizations about herself and her seemingly perfect sister. You can’t help but root for June to figure it out.”
— Audrey Huang, Belmont Books, Belmont, MA

A high school senior navigates messy boys, messier relationships, and the struggle of never quite living up to her Taiwanese mother's expectations.

A modern Judy Blume meets Jenny Han, Boys I Know is a raw and realistic look into the lives of teen girls, examining the complex overlap between teen sexuality and Asian American identity. A sharp and unflinchingly honest journey of self-discovery.

June Chu has always been the "just good enough" girl. Good enough to line the shelves with third-place trophies and steal secret kisses from her AP Bio partner, Rhys. But not good enough to meet her mother’s unrelenting expectations, or get Rhys to commit.

While June’s mother insists she follow in her (perfect) sister’s footsteps and get a (full-ride) violin scholarship, June doesn’t see the point in trying too hard if she’s destined to fall short anyway. Instead, she focuses her efforts on making her relationship with Rhys "official."

But after her methodically planned, tipsily executed scheme explodes on the level of a nuclear disaster, she flings herself into a new relationship with a guy who’s not allergic to the word girlfriend.

As the line between sex and love blurs, and pressure to map out her entire future threatens to burst, June will have to decide on whose terms she’s going to live her life—even if it means fraying her relationship with her mother beyond repair.
Anna grew up biracial in the Midwest, spending her formative years repeatedly answering the question, “What are you?” Before finding her way as a YA author, she was a CPA, a public school teacher, a tennis coach, and for one glorious summer, a waitress at a pie shop. She now lives on the West Coast, raising three kids and writing stories about girls navigating a world full of double standards.

★ "Gracia employs a whirlwind pace that complements June's myriad triumphs and failures; a large, vibrant cast; and a true-to-life teen voice to explore societal gender roles, racism, and sexuality while artfully depicting one teenager's search for herself amid cultural and familial pressures."—Publishers Weekly, Starred Review

★ "The panoply of supporting characters in this story that explores sexuality, gender roles, and relationships is finely drawn, and June is a winning protagonist with a lively, appealing voice that renders the repartee between her and her flinty, anxious mother simultaneously infuriating, hilarious, and poignant. A fresh tale about a teen’s struggles to define herself."—Kirkus Reviews, Starred Review

★ "[A] refreshingly sex-positive coming-of-age YA novel. . . . June's cultural backdrop is poignantly prominent. . . . Microaggressions and other characters' questioning of Asian Americans' authenticity are also tactfully incorporated. Throughout, June's drive to choose a college for herself--not for a boy or her parents--serves as an accessible framework around which this bold debut takes place, and touts the difficulty and importance of self-reflection."—Shelf Awareness, Starred Review

"This novel is sure to resonate with teens who haven’t yet found their calling and who are trying to figure out who they are. . . . A good and relevant purchase for all high school ­collections."—School Library Journal

"In a believable, immersive teen voice, June narrates her complicated feelings about representation and visibility as well as independence and coming of age. . . . Most notably, Gracia’s sophisticated rendering of June’s sexual experiences normalizes sexually active and thoughtful teens, and models behavior that prioritizes consent, choice . . . , and self- care."—The Horn Book

"There are many paths in life to take, whether it’s the boys you date or the college you choose — and everyone seems to have an opinion on what’s best for June Chu, but she has yet to decide what she thinks is best for herself. Boys I Know is Judy Blume’s Forever for the modern age." —Andrew King, Secret Garden Bookshop, Seattle, WA

"Fresh, funny, and fearless—a knockout novel about finding the courage to declare your place in the world." –Sarah Kuhn, From Little Tokyo, with Love

"An honest, humorous story full of candor that explores the pressures of growing up Asian American, teen identity and sexuality, and finding room to forge your own path when you have no life roadmap. Gracia doesn’t shy away from the awkwardness, messiness and confusion of adolescence—perfect for fans of Sonia Hartl and David Yoon." –Suzanne Park, Sunny Song Will Never be Famous

"Funny, sex-positive, and poignant. Boys I Know is an honest coming of age story about identity, sexuality, and the often-complicated parts of growing up and finding yourself. A touching exploration of the way teens navigate different relationships in their lives, and what it really means to not settle." –Sonia Hartl, The Lost Girls​