The Heart of the Heartland: Norwegian American Community in the Twin Cities (Paperback) 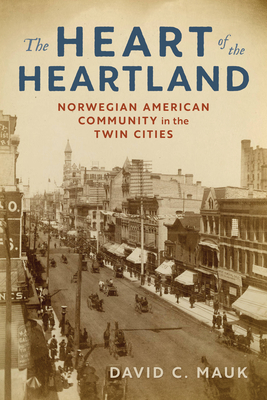 The Heart of the Heartland: Norwegian American Community in the Twin Cities (Paperback)


Usually Available/Ships Within 1 Week
An in-depth look at the Norwegian American community of Minneapolis-St. Paul and its deep and complex role in the economic, political, and cultural life of the Twin Cities over more than 170 years. Since the earliest days of European settlement in the region, tens of thousands of Norwegians have found their way to Minnesota, adding a distinctive Scandinavian flavor to the state's ethnic and cultural mix. Many early arrivals settled in the cities, while others who initially chose the countryside often departed for urban settings after they had mastered the English language and become accustomed to the ways of their adopted home. The growing Twin Cities of Minneapolis and St. Paul became home to Norwegian immigrants and their migrating compatriots alike.
These Norwegian Americans took up employment in a range of fields, in both the public and private sectors. They also assembled in churches and charitable organizations, carrying on homeland traditions even as they took on prominent roles in the larger urban scene. By the early twentieth century, public events like Syttende mai drew not only Norwegian Americans but Twin Cities residents more broadly, a level of recognition that explains the persistent sense of Norwegian-ness among later generations. Minnesotans of Norwegian descent in the twenty-first century may not speak their ancestral tongue, but they lovingly uphold many cultural practices of their ancestral home.
In The Heart of the Heartland, author David C. Mauk brings together personal interviews, demographic research, and archival exploration to inform stories of assimilation, ascendency, and collaboration among Minnesota's Norwegian Americans and their neighbors over 170 years. The narrative traces not only Twin Cities business, industrial, neighborhood, and cultural histories but also the significant and varied roles Norwegian Americans have played in the region's development.