Tales from the Minnesota Sports Beat: A Lifetime on Deadline (Paperback) 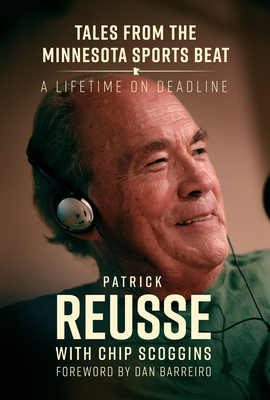 Tales from the Minnesota Sports Beat: A Lifetime on Deadline (Paperback)


Usually Available/Ships Within 1 Week
Memories and stories from more than half a century of writing, reporting, and ranting by a Minnesota sports icon. Minneapolis Star Tribune senior columnist Patrick Reusse is a legendary fixture in Minnesota sports. Like his late colleague Sid Hartman, he is known by his legion of fans (and those who find him curmudgeonly) by one name: Reusse Starting as a sportswriter in 1965 and still going strong in 2021, Reusse has covered every major sporting event imaginable and met scores of unforgettable characters during his long career in newspapers, radio, and television. Reusse's unique writing style and eye for human-interest angles have made him a master storyteller. He has collected a trove of stories along the way: from growing up in tiny Fulda as the son of an undertaker, to landing a columnist gig at a big-city newspaper; from covering Tom Kelly's Twins championship teams, to handing out fictional turkeys every Thanksgiving; from Olympic triumphs and failures, to countless major moments from Twins Cities sports teams. Reusse has seen a lot in his more than half a century reporting on sports in Minnesota and around the country. With his coauthor and fellow Star Tribune sports journalist Chip Scoggins, he brings together here his favorite stories, characters, and memories in that distinctive Reusse voice.