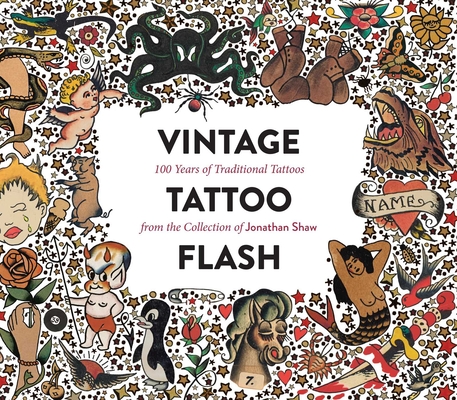 
Email or call for price
Vintage Tattoo Flash is a one-of-a-kind visual explorationof the history and evolution of tattooing in America. Aluscious, offset-printed, hardcover tome-a beautiful andserious addition to the understanding of one of the world'soldest and most popular art forms.

Electric tattooing as we know it today was invented inNew York City at the turn of the 19th century. In the firstdays of American tattooing, tattoos were primarily wornby sailors and soldiers, outlaws and outsiders. The visuallanguage of what came to be known as "traditional tattooing"was developed in those early days on the Boweryand catered to the interests of the clientele. Commonimagery that soon became canon included sailing ships,women, hearts, roses, daggers, eagles, dragons, wolves,panthers, skulls, crosses, and popular cartoon charactersof the era. The first tattooists also figured out that usingbold outlines, complimented by solid color and smoothshading, was the proper technique for creating art on abody that would stand the test of time. In the over 100years since then, techniques and styles have evolved, andthe customer base has expanded, but the core subjectmatter and philosophy developed at the dawn of electrictattooing has persisted as perennial favorites through themodern era.

While most tattoos are inherently ephemeral, transportedon skin until the death of the collector, a visual recordexists in the form of tattoo flash: the hand-painted sheetsof designs posted in tattoo shops for customers to selectfrom. Painted and repainted, stolen, traded, bought andsold, these sheets are passed between artists through onechannel or another, often having multiple useful lives in avariety of shops scattered across time and geography. Theutility of these original pieces of painted art has made itso that original examples can still be found in use or up forgrabs if you know where to look.

Vintage Tattoo Flash draws from the personal collectionof Jonathan Shaw-renowned outlaw tattooist andauthor-and represents a selection of over 300 pieces offlash from one of the largest private collections in existence.Vintage Tattoo Flash spans the first roughly 75years of American tattooing from the 1900s Bowery, to50s Texas, through the Pike in the 60s and the developmentof the first black and grey, single-needle tattooingin LA in the 70s. The book lovingly reproduces entirelyunpublished sheets of original flash from the likes of BobShaw, Zeke Owen, Tex Rowe, Ted Inman, Ace Harlyn, EdSmith, Paul Rogers, the Moskowitz brothers, and many,many others relatively known and unknown.
Jonathan Shaw is a world traveling outlaw artist, novelist, notorious folk hero and apocalypse philosopher. A legendary tattoo master, trendsetter, and innovator and creator of underground art, Shaw was born in NY to big band legend Artie Shaw and movie star Doris Dowling. He was raised in LA where he learned to tattoo on the legendary Pike boardwalk from old-school California masters. After running with the likes of Jim Morrison, the Manson Family, and Charles Bukowski, Shaw fell prey to heroin addiction and a life of crime, before fleeing 1970s Hollywood to travel the world as a merchant seaman. After living and working in South America for decades, he returned to the city of his birth, where he founded Fun City Tattoo, the first street tattoo shop in NYC since tattooing was criminalized there in the 1960s. He is the author of Narcisa: Our Lady of Ashes (HarperCollins, 2008), Vintage Tattoo Flash (2016, Powerhouse Books), and Scab Vendor: Confessions of a Tattoo Artist (Turner Publishing, 2017).
"Few have dipped so deeply or functioned so extensively in the cultural underbelly of our world than the notorious artist and adventurer, Jonathan Shaw." -Robert Williams

"Ranks with the best." -Johnny Depp

"A living example of human indestructibility that is hard to surpass." -Eugene Hutz (Gogol Bordello)

"Jonathan Shaw is an acknowledged master craftsman of the present era." -SECONDS

"Jonathan Shaw (is) a subversive and criminal inhabitant of the world of human expression." -Jim Jarmusch

''Jonathan Shaw is the great nightmare anti-hero of the new age.'' -Iggy Pop

"The images in the book, much like the bodies of those whose skin they adorned, read like a history of the cultural concerns of the time—from early nautical and military themes of patriotism and seafaring to the popular cartoon characters of a given era and our ever-shifting views on death, birth, and sex." —Esquire

"The pieces in Vintage Tattoo Flash come from the last century, but the highest concentration of work is from the 1900s to the 1960s. They represent much of the familiar iconography of American tattooing: ships, half-dressed women, birds of prey, panthers, daggers, roses, and, yes, hearts emblazoned with mom. What's fascinating to see, by leafing through Shaw's collection, is how the art form has evolved in the last hundred years. By the 1950s and '60s, the Sailor Jerry–esque American traditional designs begin to shift into different territory, influenced by other styles of tattooing: a touch of traditional Japanese here, a hint of realism there." —Men's Journal


As seen on:
The Guardian
Graphics
LA Weekly
Ponyboy Magazine