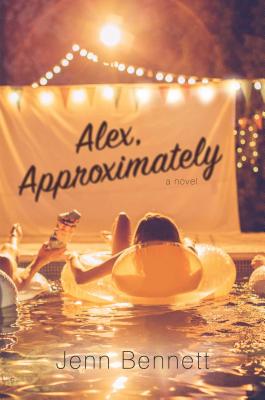 
Usually Available/Ships Within 1 Week
In this delightfully charming teen spin on You’ve Got Mail, the one guy Bailey Rydell can’t stand is actually the boy of her dreams—she just doesn’t know it yet.

Classic movie buff Bailey “Mink” Rydell has spent months crushing on a witty film geek she only knows online by “Alex.” Two coasts separate the teens until Bailey moves in with her dad, who lives in the same California surfing town as her online crush.

Faced with doubts (what if he’s a creep in real life—or worse?), Bailey doesn’t tell Alex she’s moved to his hometown. Or that she’s landed a job at the local tourist-trap museum. Or that she’s being heckled daily by the irritatingly hot museum security guard, Porter Roth—a.k.a. her new arch-nemesis. But life is whole lot messier than the movies, especially when Bailey discovers that tricky fine line between hate, love, and whatever-it-is she’s starting to feel for Porter.

And as the summer months go by, Bailey must choose whether to cling to a dreamy online fantasy in Alex or take a risk on an imperfect reality with Porter. The choice is both simpler and more complicated than she realizes, because Porter Roth is hiding a secret of his own: Porter is Alex…Approximately.
Jenn Bennett is an award-winning author of young adult books, including Alex, Approximately; Starry Eyes; The Lady Rogue; and Always Jane. She also writes historical romance and fantasy for adults. Her books have earned multiple starred reviews, won the Romance Writers of America’s RITA® Award, and been included on Publishers Weekly’s Best Books annual list. She currently lives near Atlanta with one husband and two dogs.

You’ve Got Mail gets a teenaged spin in this story of Bailey, classic film buff and product of divorce, who moves across the country to live in a California surfing town with her dad. Bailey’s been swapping movie facts with online pal Alex, a boy who happens to live in that same California town. Alex, though, still thinks she lives on the East Coast, and doesn’t know her real name—Bailey’s mom is a high-powered divorce attorney, and Bailey is all too familiar with the value of privacy. A summer job at a local museum has Bailey finding a new best friend in spunky, British Grace, and a new nemesis in Porter, a security guard and member of a legendary—and plagued by tragedy—surfer family. It’s not long before Bailey and Porter’s verbal sparring turns into something more, and while it becomes clear to the reader that Porter is Alex, neither he nor Bailey have any idea. Strong character development makes this a must form romancereaders: bottled-up Bailey has plenty of secrets in her past, and Porter’s family dynamics, plus his Hawaiian background and disintegrating friendship with a troubled fellow surfer, give him depth. There are a lot of different, sometimes dramatic, threads here, but the plot never feels overcrowded. Movie quotes kick off each chapter, and the California backdrop is an ideal setting for this uncommonly nuanced summer romance. — Maggie Reagan
— Booklist, STARRED REVIEW

A movie-obsessed teen moves to her dad's beach town and unexpectedly falls for an edgy surfer rather than the "film-buff soul mate" she was expecting to meet. The summer before senior year, 17-year-old Bailey Rydell moves from D.C. to her father's small beach town on the Central California coast. The one perk of moving is that "Alex," her favorite chat-mate on a classic-film fan forum, lives there too, and she plans to surprise him—not that they know one another's real names (she goes by "Mink" online). Her first day working at a mansion-cum-museum, introverted Bailey, a white girl who sports platinum-blonde Lana Turner pin curls, meets Porter Roth, a "ridiculously good-looking" but cocky 18-year-old security guard from a legendary local surfing family. Porter, who's Hapa (half Polynesian/Chinese, half white), has a unique way of exasperating Bailey. As she futilely attempts to find Alex via chat-transcript clues, readers will figure out his identity long before she does. There's definitely a The Shop Around the Corner buildup to the romantic chemistry, but in addition to their charming banter and online-quiz exchanges, Bailey and Porter also tackle substantive issues such as anxiety, PTSD, drug abuse, cheating, and sexual experience. Bennett creates an authentically multicultural ensemble, from Bailey's Nigerian-by-way-of-London new bestie, Grace, to her dad's Mexican-American girlfriend and Porter's references to Hawaiian cultural beliefs. An irresistible tribute to classic screwball-comedy romances that captures the "delicious whirling, twirling, buzzing" of falling in love. (Fiction. 14-18)
— Kirkus, STARRED REVIEW

A year after her mother divorces to marry a lawyer, Bailey Rydell decides to leave Washington, D.C., to live with her father in California. One of her primary motives for going is to track down Alex, a boy she met online but has never seen in person. Like Bailey, Alex loves old films and, coincidentally enough, he lives in her father’s neighborhood. But after Bailey settles in and starts a job at a quirky local museum, her mission to find her “film-buff soul mate” is sidelined as she becomes absorbed in a love-hate relationship with Porter, her arrogant, surfer coworker. As might be expected, Bailey’s and Porter’s fiery retorts soon kindle passion, and the two start dating despite Bailey’s guilt about keeping him a secret from her online pal. In what’s essentially a YA version of You’ve Got Mail, Bennett’s (The Anatomical Shape of a Heart) contemporary romance offers sympathetic characters and plenty of drama. Although the climax is forced and predictable, the protagonists’ backstories shed light on their respective anxieties, adding depth to their conflicts. Ages 14–up.
— Publishers Weekly

Mink and Alex share a love of classic movies via an online group for film fanatics. Seventeen-year-old Bailey and eighteen-year-old Porter share a deep animosity for each other as coworkers at the Cove, a kitschy museum in Coronado Cove, California. Unbeknownst to them, Mink is Bailey, Alex is Porter, and the makings of romantic comedy are put into play. Certain revelations move Bailey and Porter’s enmity to sardonic banter to flirtatious teasing and eventfully to some hot sex in the back of surfer boy Porter’s van; however, they both feel somewhat horrible about “cheating” on their online maybe-more-than-platonic friends. A sexier, modern version of You’ve Got Mail and The Shop Around the Corner, this will hit romcom fans right in the sweet spot, and the chemistry between Porter/Alex and Mink/ Bailey manages both a spirited charm and a lusty spark. Narrator Bailey is bold, witty, and humorously self-deprecating, while Porter is the bro with the heart of gold. Two subplots and a few too many tropes of the romance genre threaten to send the story off the rails, but the focus mostly stays on Bailey and Porter, who carry the day like true stars—the heroes and heroines of their beloved movies would be proud.
— BCCB