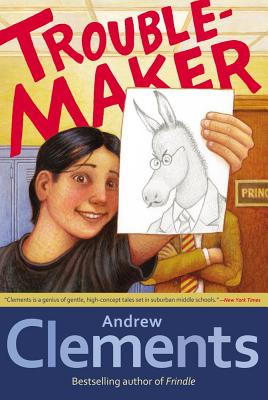 
Backordered - Estimated Re-Stock Unknown
Once a troublemaker, always a troublemaker? A reputation proves challenging to change in this “rock-solid school story” (Publishers Weekly) from Andrew Clements.

Clayton Hensley is accustomed to trouble: There’s a folder of incident reports in Principal Kelling’s office that’s as thick as a phonebook and growing daily. Most recently, Clay’s art teacher told the class to spend the period drawing anything they wanted, and Clay decided to be extra “creative” by drawing a spot-on portrait of Principal Kelling…as a donkey.

It’s a pretty funny joke, but Clay is coming to realize that the biggest joke of all may be on him. When his big brother, Mitchell, gets in some serious trouble, Clay decides to change his own mischief-making ways…but he can’t seem to shake his reputation as a troublemaker.

From the master of the school story comes a book about the fine line between good-humored mischief and dangerous behavior—and how everyday choices can close or open doors.
Andrew Clements (1949–2019) was the author of the enormously popular Frindle. More than 10 million copies of his books have been sold, and he was nominated for a multitude of state awards, including a Christopher Award and an Edgar Award. His popular works include About Average, Troublemaker, Extra Credit, Lost and Found, No Talking, Room One, Lunch Money, and more. He was also the author of the Benjamin Pratt & the Keepers of the School series. Find out more at AndrewClements.com.

Mark Elliott has a BFA in illustration from the School of Visual Arts. He has illustrated a number of book covers, and his work has been exhibited at the Society of Illustrators and the Art Directors Guild. Mark lives on a sheep farm in the Hudson Valley region of New York.