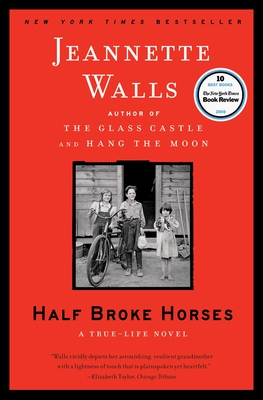 “Jeannette Walls has written another blockbuster. I could not put down this story of her grandmother, Lily Casey Smith, and her determination to survive and to help others around her to survive, too. This story will grab you immediately and continue in a compelling and forceful way all the way to the end.”
— Roberta Rubin, The Book Stall At Chestnut, Winnetka, IL

“This is a marvelous tribute to Jeannette Walls' unforgettable grandmother, Lily Casey Smith. Smith was born in West Texas in 1901, and lived a tough, rough life with her own brand of grace. She didn't like nonsense, prejudice, or whining, but she had a great sense of humor along with her practical, hardworking nature. This is a stunning account of the times and most especially the indomitable Lily. An outstanding choice for all reading groups.”
— Susan Wasson, Bookworks, Albuquerque, NM

Half Broke Horses is Laura Ingalls Wilder for adults, as riveting and dramatic as Isak Dinesen’s Out of Africa or Beryl Markham’s West with the Night. Destined to become a classic, it will transfix readers everywhere.

“Those old cows knew trouble was coming before we did.” So begins the story of Lily Casey Smith, Jeannette Walls’s no-nonsense, resourceful, and spectacularly compelling grandmother. By age six, Lily was helping her father break horses. At fifteen, she left home to teach in a frontier town—riding five hundred miles on her pony, alone, to get to her job. She learned to drive a car and fly a plane. And, with her husband, Jim, she ran a vast ranch in Arizona. She raised two children, one who is Jeannette’s memorable mother, Rosemary Smith Walls, unforgettably portrayed in The Glass Castle.

Lily survived tornadoes, droughts, floods, the Great Depression, and the most heartbreaking personal tragedy. She bristled at prejudice of all kinds—against women, Native Americans, and anyone else who didn’t fit the mold. Rosemary Smith Walls always told Jeannette that she was like her grandmother, and in this true-life novel, Jeannette Walls channels that kindred spirit. Half Broke Horses is Laura Ingalls Wilder for adults, as riveting and dramatic as Isak Dinesen’s Out of Africa or Beryl Markham’s West with the Night. Destined to become a classic, it will transfix readers everywhere.
Jeannette Walls graduated from Barnard College and was a journalist in New York. Her memoir, The Glass Castle, has been a New York Times bestseller for more than eight years. She is also the author of the instant New York Times bestsellers The Silver Star and Half Broke Horses, which was named one of the ten best books of 2009 by the editors of The New York Times Book Review. Walls lives in rural Virginia with her husband, the writer John Taylor.

Praise for Half Broke Horses

“Jeannette Walls . . . once again proves that the combination of gifted storyteller with great stories is both rare and intoxicating."
—Janet Okoben, The Cleveland Plain Dealer

“[An] eloquent tribute to a pragmatic heroine . . . A powerhouse—fast-moving, fearless and impossible to forget.”
—Michelle Green, People

“[Jeannette Walls is] the third generation of a line of indomitable women whose paths she has inscribed on the permanent record, enriching the common legend of our American past.”
—Liesl Schillinger, New York Times Book Review

"Half Broke Horses [is] the tale of yet another free-spirited wisecracking relative, her maternal grandmother, Lily Casey Smith. Think a rifle-toting, horse-breaking Annie Oakley in a biplane."
—Craig Wilson, USA Today

“Hugely entertaining and provocative… A triumphant novel of a fearless, progressive woman who will not be corralled.”
—Donna Seaman, Booklist starred review

"Lily Casey Smith is one astonishing woman...a half-broke horse herself who's clearly passed on her best traits to her granddaughter. Told in a natural, offhand voice that is utterly enthralling, this is essential reading for anyone who loves good fiction."
—Library Journal

"One of those heartwarming stories about indomitable women that will always find an audience."
—Publisher's Weekly

"Walls knows how to tell a story with love and grit."
—Kirkus