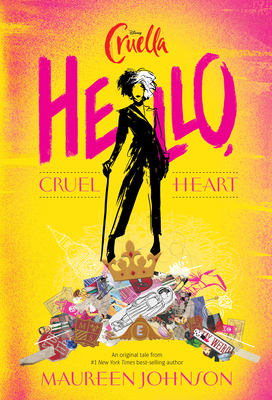 
Swinging London, Summer 1967. Sixteen-year-old Estella, gifted with talent, ingenuity, and ambition, dreams of becoming a renowned fashion designer. But life seems intent on making sure her dreams never come true. Having arrived in London as a young girl, Estella now runs wild through the city streets with Jasper and Horace, amateur thieves who double as Estella’s makeshift family and partners-in-(petty)-crime. How can Estella dedicate herself to joining the ranks of the London design elite when she’s sewing endless costumes and disguises for the trio’s heists?

When a chance encounter with Magda and Richard Moresby-Plum, two young scions of high society, vaults Estella into the world of the rich and famous, she begins to wonder whether she might be destined for more after all. Suddenly, Estella’s days are filled with glamorous parties, exclusive eateries, flirtations with an up-and-coming rock star, and, of course, the most cutting-edge fashions money can buy. But what is the true cost of keeping up with the fast crowd—and is it a price Estella is willing to pay?
Maureen Johnson is the New York Times and USA Today best-selling author of several YA novels, including 13 Little Blue Envelopes, The Name of the Star, and Truly Devious. She has also done collaborative works, such as Let it Snow (with John Green and Lauren Myracle), recently released as a full-length Netflix film. She has an MFA in writing from Columbia University and lives in New York City. Visit her website at maureenjohnsonbook.com

"A fresh take for a new generation of Disney lovers."—Booklist

"Estella’s complete naïveté in the face of wealth and sophistication is convincingly drawn, and her fashionista ability is fun and engaging; the ending brings a twist that readers may not see coming... Rags to riches with a British twist."—Kirkus Reviews

"Teens will want to read the backstory of one of Disney’s most iconic villains. Johnson creates the swinging 1960s London of Estella’s youth in vibrant color and cements the bond between Estella, Horace, and Jasper...Fans of Johnson’s other books will flock to this classic tale of choosing between friends."—School Library Journal

“Johnson quickly sets the game afoot, skillfully introducing a Clue-like set of characters, laying out various motives, and hinting at long held secrets. There’s a delicious slow-burn element to the locked-room mystery in Stevie’s present, while the chapters on the kidnappings read like a true crime novel.”—Bulletin of the Center for Children's Books

“Stevie Bell is a dyed-in-the-wool true-crime buff. There is a lot to love here. Fans of puzzles, boarding school stories, and true crime will tear through this book and love every minute.”—School Library Journal

“The story raises more questions than answers, leaving readers hoping Johnson has another entry up her clever sleeves. A classic mystery that would make Dame Agatha proud.”—Kirkus Reviews

“Johnson gives and she takes away: a few major mysteries are satisfying solved, but other long-standing riddles remain tantalizingly indecipherable, and several new ones come into play by the enigmatic end. Readers, hang tight: there’s one more round to come, and if the signs are right, it’ll be to die for.”—Booklist

“Jumping between past and present, Johnson’s novel is deliciously atmospheric, with a sprawling cast of complex suspects/potential victims, surprising twists, and a dash of romance. Johnson remains a master at combining jittery tension with sharp, laugh-out-loud observations.” (Publishers Weekly (starred review))—Publishers Weekly