A Blade So Black (The Nightmare-Verse #1) (CD-Audio) 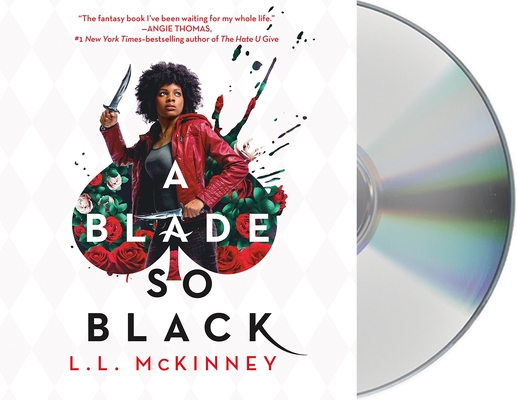 A Blade So Black (The Nightmare-Verse #1) (CD-Audio)

This is book number 1 in the The Nightmare-Verse series.

"With memorable characters and page-turning thrills, A Blade So Black is the fantasy book I've been waiting for my whole life. Alice is Black Girl Magic personified." —Angie Thomas, #1 New York Times-bestselling author of The Hate U Give

For fans of Marissa Meyer, L.L. McKinney's A Blade So Black delivers an irresistible urban fantasy retelling of Alice in Wonderland... but it's not the Wonderland you remember.

The first time the Nightmares came, it nearly cost Alice her life. Now she's trained to battle monstrous creatures in the dark dream realm known as Wonderland with magic weapons and hardcore fighting skills. Yet even warriors have a curfew.

Life in real-world Atlanta isn't always so simple, as Alice juggles an overprotective mom, a high-maintenance best friend, and a slipping GPA. Keeping the Nightmares at bay is turning into a full-time job. But when Alice's handsome and mysterious mentor is poisoned, she has to find the antidote by venturing deeper into Wonderland than she’s ever gone before. And she'll need to use everything she's learned in both worlds to keep from losing her head... literally.

And don't miss the thrilling sequel, A Dream So Dark!

Named one of The Root’s 100 Most Influential African-Americans of 2020, L.L. McKinney is a writer, a poet, and an active member of the kidlit community. She’s an advocate for equality and inclusion in publishing, the co-founder of Juneteenth Book Fest, and the creator of the hashtags #PublishingPaidMe and #WhatWOCWritersHear. She’s also a gamer girl and an adamant Hei Hei stan. She is the author of A Blade So Black, A Dream So Dark, and A Crown So Cursed.
"Narrator Jeanette Illidge sets the perfect tone in this reimagined urban fantasy based on the classic Alice in Wonderland." -AudioFile