Mighty Be Our Powers: How Sisterhood, Prayer, and Sex Changed a Nation at War (Paperback) 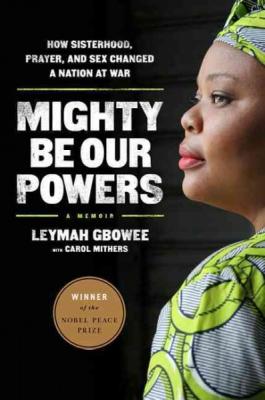 Mighty Be Our Powers: How Sisterhood, Prayer, and Sex Changed a Nation at War (Paperback)

By Leymah Gbowee, Carol Mithers (With)


Backordered - Estimated Re-Stock Unknown
The winner of the Nobel Peace Prize shares her inspirational, powerful story of how a group of women working together created an unstoppable force that brought peace to Liberia.

As a young woman, Leymah Gbowee was broken by the Liberian civil war, a brutal conflict that destroyed her country and claimed the lives of countless relatives and friends. Propelled by her realization that it is women and girls who suffer most during conflicts, she found the courage to turn her bitterness into action.

She helped organize and then lead the Liberian Mass Action for Peace, which brought together Christian and Muslim women in a nonviolent movement that engaged in public protest, confronted Liberia's ruthless president and rebel warlords, and even held a sex strike.

With an army of women, Gbowee helped lead her nation to peace-and became an international leader who changed history, won the Nobel Peace Prize for her work, and fiercely advocates for girls' empowerment and leadership. Mighty Be Our Powers is the gripping chronicle of a journey from hopelessness to liberation that will touch all who dream of a better world.
2011 Nobel Peace Laureate Leymah Gbowee is a Liberian peace activist, trained social worker and women's rights advocate. She currently serves as Executive Director of the Women, Peace and Security Program at the Earth Institute at Columbia University and is the founder and current President of the Gbowee Peace Foundation Africa, the founding head of the Liberia Reconciliation Initiative, as well as co-founder and former Executive Director of Women Peace and Security Network Africa (WIPSEN-A). She is also a founding member and former Liberian Coordinator of Women in Peacebuilding Network/West Africa Network for Peacebuilding (WIPNET/WANEP). She travels internationally to advocate for human rights and peace & security.

Ms. Gbowee's leadership of the Women of Liberia Mass Action for Peace -- which brought together Christian and Muslim women in a nonviolent movement that played a pivotal role in ending Liberia's civil war in 2003 -- is chronicled in her memoir, Mighty Be Our Powers, and in the award-winning documentary, Pray the Devil Back to Hell. Ms. Gbowee holds an M.A. in Conflict Transformation from Eastern Mennonite University (Harrisonburg, VA), and a Doctor of Laws (LLD) honoris causa from Rhodes University in South Africa and the University of Alberta in Canada.

Ms. Gbowee advises numerous organizations working for peace, women's rights, youth, and sustainable development, and has held distinguished fellowships at Barnard College and Union Theological Seminary. In 2016, Ms. Gbowee was awarded the Lifetime Africa Achievement Prize (LAAP) for Peace in Africa by the Millennium Excellence Foundation. Ms. Gbowee serves as a Sustainable Development Goals Advocate for the United Nations and as a Member of the World Refugee Council. In 2017, Ms. Gbowee was selected by the United Nations Secretary General to serve as a Member of United Nations Secretary-General's High Level Advisory Board on Mediation. In 2018, she was appointed to the Gender Equality Advisory Council Secretariat for Canada's G7 Presidency.

Leymah is the proud mother of eight children.