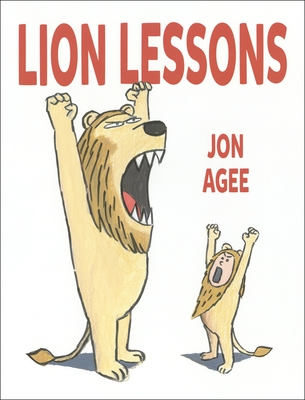 
Email or call for price
With the wit and read-aloud appeal of Peter Brown’s Children Make Terrible Pets and William Steig’s Pete’s a Pizza, this funny, fierce picture book teaches kids just what it takes to be a great lion

There are seven steps to becoming a proper lion, including Looking Fierce, Roaring, Prowling Around, and Pouncing. Our young hero, a rather meek and scrawny human boy, does his best to learn the necessary skills during his training with a master instructor (who just happens to be a real lion). After a grueling set of lessons, the boy discovers that that the final step—Looking Out for Your Friends—is the most important of all. That’s how any kid can earn his lion diploma (not to mention the affection of every cat in town).
Jon Agee is the author/illustrator of many acclaimed books for children, including ALA Notable Books Terrific, Milo's Hat Trick, and The Incredible Painting of Felix Clousseau, and a series of popular wordplay books including the IRA-CBC Children's Choice book of palindromes, Go Hang a Salami! I'm a Lasagna Hog! Jon grew up along the Hudson River in Nyack, New York, and went to college at The Cooper Union School of Art in New York City, where he studied painting and filmmaking. Now a full-time author, he lives in San Francisco with his wife, Audrey, and their Havanese puppy, Charlotte.
Praise for Lion Lessons

* "Agee's sentences are short and punchy, and he carves out gouache shapes in thick, deliberate ink outlines. He sets up a ridiculous situation with a straight face, approaching it with understated humor and leonine confidence."—Publishers Weekly, starred review

* "This fun journey of character development neatly turns the conversation from the cowardice of bullies to what it means to be lionhearted, all in a delightful, subduedly comic package. 'Bravo!' said the lion."—Booklist, starred review

* "An outstanding read-aloud and a rewarding story."—Horn Book, starred review

"Blending sparse text with hilarious images, Agee mines a lot of humor. . . . A jubilant romp fit for a lion."—Kirkus