The Secret Texts of Hellenic Polytheism: A Practical Guide to the Restored Pagan Religion of George Gemistos Plethon (Paperback) 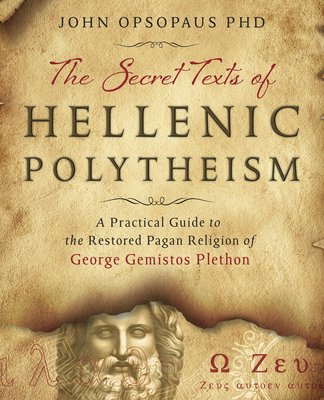 The Secret Texts of Hellenic Polytheism: A Practical Guide to the Restored Pagan Religion of George Gemistos Plethon (Paperback)

George Gemistos (c. 1355-1452), who called himself "Plethon," helped trigger the Renaissance by reawakening an interest in Platonism, but his secret book on its Neopagan theology was burned after his death. Only sixteen chapters of Plethon's Book of Laws escaped the flames and, for the first time ever, they have been translated into English in their entirety.

Through translations and commentary by John Opsopaus, PhD, you can immerse yourself in Plethon's complete system of theology and religious practice focused on the Hellenic pantheon and deeply rooted in ancient Greek Paganism. This impressive guide features rituals, prayers, invocations, and hymns for daily and holiday use along with Plethon's complete sacred calendar. Featuring instructions from the Book of Laws on conducting ceremonies, rites, and more, The Secret Texts of Hellenic Polytheism enhances your spiritual practice and understanding of Neoplatonic philosophy.

John Opsopaus, PhD, (Tennessee) has practiced magic since the 1960s and his writing has been published in various magical and Neopagan magazines. He frequently presents workshops on Hellenic magic, Neopaganism, Pythagorean theurgy, and spiritual practices. John is a retired university professor with more than forty-five years of experience reading ancient Greek and Latin. He is also the author of Oracles of Apollo.