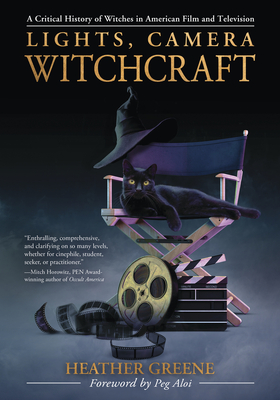 Deviant mistress of the dark arts. Goddess worshipper dancing in the moonlight. Crystal-wielding bookworm with a black hat and broom. We recognize the witch because no industry has been quite so influential in shaping our vision of her as Hollywood. This comprehensive book delves into the fascinating history of witchcraft and witches in American film and television.

From Joan the Woman and The Wizard of Oz to Carrie and Charmed, author and film scholar Heather Greene explores how these movies and TV shows helped influence the public image of the witch and profoundly affected how women negotiate their power in a patriarchal society. Greene presents more than two hundred examples spanning silent reels to present-day blockbusters. As you travel through each decade, you'll discover compelling insights into the intersection of entertainment, critical theory, gender studies, and spirituality.

Heather Greene is a freelance writer, journalist, and editor. She received a B.A. in film at Wesleyan University and an M.A. in film studies from Emory University. She also studied film and theater at Cornell University and the University of Paris. She has written for Religion News Service, Turner Classic Movies, The Wild Hunt, Circle Magazine, Patheos.com, and other outlets. She is a member of Circle Sanctuary, Covenant of the Goddess, and the Religion Newswriters Association.Peg Aloi is a freelance writer, film critic, and media studies scholar. Her anthology New Generation Witches (Ashgate Press 2008), co-edited with Hannah Johnston, explores the world of teenage witchcraft. She teaches media studies at the College of Saint Rose, and has been a consultant on a number of feature films.