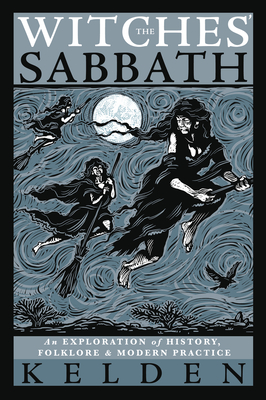 By Kelden, Jason Mankey (Foreword by)

Discover the Hidden Depths of the Sabbath

Take flight for a mesmerizing exploration of an event long shrouded in fear and mystery--the Witches' Sabbath. Kelden presents an in-depth examination of the Sabbath's historical and folkloric development as well as its re-emergence within the modern practice of Witchcraft. From discussions on the folklore of flight and the events of nocturnal gatherings to enchanting rituals and recipes, you'll find everything you need to not only understand the nature of the legendary Sabbath, but also journey there yourself. Offering impressive research and compelling stories from across Europe and the early American colonies, this book is the ultimate resource for discovering an oft misunderstood and overlooked aspect of Witchcraft.

Includes a foreword by Jason Mankey, author of The Horned God of the Witches

Kelden (Minnesota) has been practicing Traditional Witchcraft for more than a decade. He is the author of The Crooked Path: An Introduction to Traditional Witchcraft. Additionally, his writing has appeared in The Witch's Altar, The New Aradia: A Witch's Handbook to Magical Resistance, and This Witch magazine. Kelden is also the cocreator of The Traditional Witch's Deck, and he authors a blog on the Patheos Pagan channel called By Athame and Stang. In his free time, Kelden enjoys reading, hiking, growing poisonous plants, and playing ukulele.Jason Mankey is a third-degree Gardnerian High Priest and helps run two Witchcraft covens in the San Francisco Bay Area with his wife, Ari. He is a popular speaker at Pagan and Witchcraft events across North America and Great Britain and has been recognized by his peers as an authority on the Horned God, Wiccan history, and occult influences in rock and roll. You can follow him on Instagram and Twitter @panmankey. Jason is the author of several books, including The Witch's Book of Spellcraft, The Horned God of the Witches, and Transformative Witchcraft.