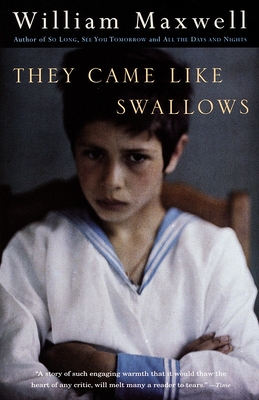 To eight-year old Bunny Morison, his mother is an angelic comforter in whose absence nothing is real or alive.  To his older brother, Robert, his mother is someone he must protect, especially since the deadly, influenza epidemic of 1918 is ravaging their small Midwestern town.  To James Morison, his wife, Elizabeth, is the center of a life that would disintegrate all too suddenly were she to disappear.
Through the eyes of these characters, William Maxwell creates a sensitive portrait of an American family and of the complex woman who is its emotional pillar.  Beautifully observed, deftly rendering the civilities and constraints of a vanished era, They Came Like Swallows measures the subterranean currents of love and need that run through all our lives.  The result confirms Maxwell's reputation as one of the finest writers we have.

William Maxwell was born in 1908, in Lincoln, Illinois. When he was fourteen his family moved to Chicago and he continues his education there and at the University of Illinois.  After a year of graduate work at Harvard he went back to Urbana and taught freshman composition, and then turned to writing.  He has published six novels, three collections of literary essays and reviews, and a book for children.  For forty years he was a fiction editor at The New Yorker. From 1969 to 1972 he was president of the National Institute of Arts and Letters,  He received the Brandeis Creative Arts Award Medal and, for So Long, See You Tomorrow,  the American Book Award and the Howells Medal of the American Academy of Arts and Letters. He died in 2000.

"A story of such engaging warmth that it would thaw the heart of any critic... will melt many a reader to tears."- Times