When She Dreams (Hardcover) 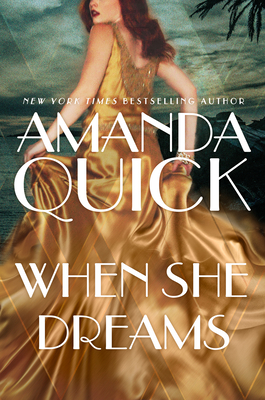 When She Dreams (Hardcover)


Usually Available/Ships Within 1 Week
Return to 1930s Burning Cove, California, the glamorous seaside playground for Hollywood stars, mobsters, spies, and a host of others who find more than they bargain for in this mysterious town.

Maggie Lodge, assistant to the reclusive advice columnist known only as Dear Aunt Cornelia to her readers, hires down-but-not-quite-out private eye Sam Sage to help track down the person who is blackmailing her employer. Maggie and Sam are a mismatched pair. As far as Sam is concerned, Maggie is reckless and in over her head. She is not what he had in mind for a client, but he can’t afford to be choosy. Maggie, on the other hand, is convinced that Sam is badly in need of guidance and good advice. She does not hesitate to give him both.

In spite of the verbal fireworks between them, they are fiercely attracted to each other, but each is convinced it would be a mistake to let passion take over. They are, after all, keeping secrets from each other. Sam is haunted by his past, which includes a marriage shattered by betrayal and violence. Maggie is troubled by intense and vivid dreams—dreams that she can sometimes control. There are those who want to run experiments on her and use her for their own purposes, while others think she should be committed to an asylum.

When the pair discovers someone is impersonating Aunt Cornelia at a conference on psychic dreaming and a woman dies at the conference, the door is opened to a dangerous web of blackmail and murder. Secrets from the past are revealed, leaving Maggie and Sam in the path of a ruthless killer who will stop at nothing to exact vengeance.
Amanda Quick is a pseudonym for Jayne Ann Krentz, the author, under various pen names, of more than fifty New York Times bestsellers. There are more than 35 million copies of her books in print. She is also the author of the Ladies of Lantern Street novels and the Arcane Society series.

"With its perfectly executed plot, snappy dialogue, and generous dash of dry wit, this is proof positive of why Quick’s novels continue to be the platinum standard for stylish American historical romance kissed with a hint of sophisticated suspense and a dash of the supernatural.”—Booklist, starred review

“The metanarrative commentary about storytelling and genre plus the prewar West Coast glamour and noirlike incidents make for an updated gothic with…appeal.”—Kirkus Reviews

“A fun, perfectly crafted, escape read. The glitz and glamour is there on the pages along with the down and dirty and its greed and violence…When you pick up When She Dreams, set aside some time to enjoy, because putting it down until the last page is very hard to do.”—Fresh Fiction

“It was nice to revisit Burning Cove and some of the characters we have seen before. I love the unique 1930s California setting, and I am entertained by the mysteries.”—Smexy Books

“An exciting, intriguing, intense and suspenseful story that has a number of surprises and twists…When She Dreams was fast paced, enthralling, with a romantic couple whose chemistry was sizzling. Amanda Quick once again gives us a complex mystery that had a bit of everything in this glamorous historical world of 1930’s.”—The Reading Café

“Fans of historical mysteries, the 1930s and paranormal woo-woo will enjoy When She Dreams and the Buring Cove series.”—Caffeinated Book Reviewer