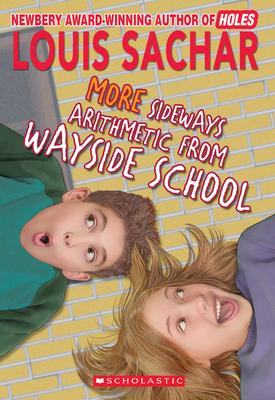 
Usually Available/Ships Within 1 Week
From the Newbery award-winning author of HolesEverything in Mrs. Jewls's class has gone topsy-turvy...again. The report cards are scrambled, the pop quiz won't pop, and watermelons are falling out the windows. On top of all that, the boys are upset because Allison has announced that only two of them will be invited to her birthday party, since if more than two boys come, they'll all start acting silly. You never know how things will add up at Wayside School.
Childhood MemoriesAs writer of books for elementary school students, Louis Sachar tries to recall what it felt like for him to be that age. Despite the notion that times have changed, he thinks that kids in grade school are basically the same as they were when he was young. For example, in East Meadow, New York, where Sachar was born, he remembers having to keep away from the woods across the street to avoid the older, tough kids who played there. Looking back now, he thinks those tough kids were probably only eleven or twelve years old! When Sachar turned nine, his family moved to Orange County in California, which, at the time, was mostly orange groves. He cut through the orange groves on the way to school, and had orange fights on the way home. The Path to Becoming an AuthorIt wasn't until high school that Sachar began to love reading. In college, he developed a particular interest in Russian literature and somehow got the ridiculous ambitious notion to learn the language and read his favorite Russian authors in the original language. After taking over a year of Russian, he realized it was still Greek to him. Sachar dropped out of Russian class and tried to figure out what class he should take instead. As he wandered across the campus, he saw an elementary school girl handing out pieces of paper. He took one from her. It read: 'Help. We need teachers' aides at our school. Earn three units of credit.' Prior to that time, Sachar had no interest whatsoever in kids. However, he signed up to be a teacher's aide because he needed to take something other than Russian, and it sounded easy. It turned out to be not only his favorite class, but also the most important class Sachar took during his college career. After he was at the school for a while, he was asked to be the 'Noon Time Supervisor.' It was his job to watch over the kids during lunch. Sachar played games with the kids who all called him 'Louis, the Yard Teacher.' The Story Behind Sideways StoriesAround that time Sachar came upon In Our Town by Damon Runyon, a book of very short stories about different characters in a town. It gave him the idea for Sideways Stories from Wayside School, which is a book of short stories about different kids in a school. All the kids are named after kids he knew at the school where he worked. 'Louis the Yard Teacher,' is also a character. Sachar says he had more fun writing that book than any of his others, because it was just a hobby then, and he never truly expected to be published. A Career Choice Sideways Stories from Wayside School was published just as Sachar began law school. For six years he struggled over trying to decide between being an author or a lawyer. During the time that he finished law school and took a job as a lawyer, Sachar wrote three more children's books. His decision had been made. Sachar has been an attorney since 1981, but has chosen to devote his time to writing children's books.