The Museum of Desire: An Alex Delaware Novel (Hardcover) 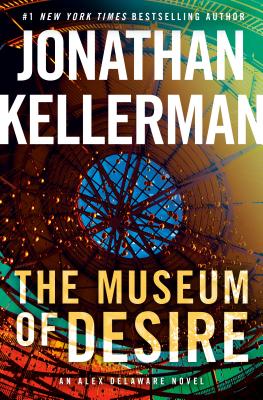 The Museum of Desire: An Alex Delaware Novel (Hardcover)

This is book number 35 in the Alex Delaware series.

LAPD Lieutenant Milo Sturgis has solved a lot of murder cases. On many of them—the ones he calls “different”—he taps the brain of brilliant psychologist Dr. Alex Delaware. But neither Alex nor Milo are prepared for what they find on an early morning call to a deserted mansion in Bel Air. This one’s beyond different. This is predation, premeditation, and cruelty on a whole new level.

Four people have been slaughtered and left displayed bizarrely and horrifically in a stretch limousine. Confounding the investigation, none of the victims seems to have any connection to any other, and a variety of methods have been used to dispatch them. As Alex and Milo make their way through blind alleys and mazes baited with misdirection, they encounter a crime so vicious that it stretches the definitions of evil.
Jonathan Kellerman is the #1 New York Times bestselling author of more than forty crime novels, including the Alex Delaware series, The Butcher's Theater, Billy Straight, The Conspiracy Club, Twisted, True Detectives, and The Murderer's Daughter. With his wife, bestselling novelist Faye Kellerman, he co-authored Double Homicide and Capital Crimes. With his son, bestselling novelist Jesse Kellerman, he co-authored A Measure of Darkness, Crime Scene, The Golem of Hollywood, and The Golem of Paris. He is also the author of two children's books and numerous nonfiction works, including Savage Spawn: Reflections on Violent Children and With Strings Attached: The Art and Beauty of Vintage Guitars. He has won the Goldwyn, Edgar, and Anthony awards and the Lifetime Achievement Award from the American Psychological Association, and has been nominated for a Shamus Award. Jonathan and Faye Kellerman live in California and New Mexico.