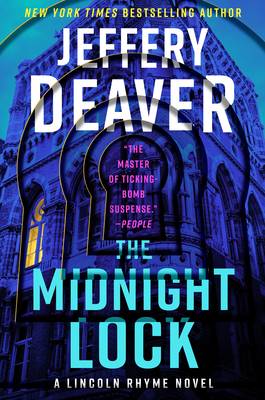 This is book number 15 in the Lincoln Rhyme Novel series.

The "master of ticking-bomb suspense" (People) Jeffery Deaver delivers the latest thriller featuring his beloved protagonists Lincoln Rhyme and Amelia Sachs as they search for a criminal whose fascination with breaking locks terrorizes New York City.

A woman awakes in the morning to find that someone has picked her apartment’s supposedly impregnable door lock and rearranged personal items, even sitting beside her while she slept. The intrusion, the police learn, is a message to the entire city of carnage to come. Lincoln Rhyme and Amelia Sachs are brought in to investigate and soon learn that the sociopathic intruder, who calls himself "the Locksmith,” can break through any lock or security system ever devised. With more victims on the horizon, Rhyme, Sachs and their stable of associates must follow the evidence to the man’s lair… and discover his true mission.

Their hunt is interrupted when an internal investigation in the police force uncovers what seems to be a crucial mistake in one of Rhyme's previous cases. He’s fired as a consultant for the NYPD and must risk jail if he investigates the Locksmith case in secret.

The Midnight Lock is a roller-coaster read that takes place over just a few days’ time, features surprise after surprise and offers a fascinating look at the esoteric world of lockpicking.
Jeffery Deaver is the #1 international bestselling author of more than forty novels, three collections of short stories, and a nonfiction law book. His books are sold in 150 countries and translated into 25 languages. His first novel featuring Lincoln Rhyme, The Bone Collector, was made into a major motion picture starring Denzel Washington and Angelina Jolie. He's received or been shortlisted for a number of awards around the world, including Novel of the Year by the International Thriller Writers and the Steel Dagger from the Crime Writers' Association in the United Kingdom. In 2014, he was the recipient of three lifetime achievement awards. A former journalist, folksinger, and attorney, he was born outside of Chicago and has a bachelor of journalism degree from the University of Missouri and a law degree from Fordham University.
“The wait has been worth it. This is prime Rhyme: a fiendishly smart villain, bewildering crimes, plenty of plot twists, and Lincoln, the quadriplegic criminalist, is at his cranky, belligerent, brilliantly clever best.”
—Booklist

“The dialogue and plotting are as sharp as ever in The Midnight Lock …If the burglar’s break-in feats often resemble magic, so do some of Deaver’s tricks.”
—The Sunday Times of London

“Some readers will be aghast in admiration at the nonstop revelations, others impatient for every last T to be crossed so that they can turn the last page and get to sleep before dawn. In the end, everyone will agree that there’s no other detective under the midnight moon like Lincoln Rhyme.”
—Kirkus Reviews