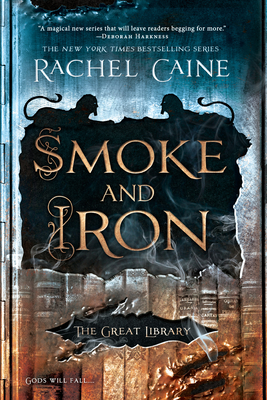 This is book number 4 in the The Great Library series.

To save the Great Library, the unforgettable characters from Ink and Bone, Paper and Fire, and Ash and Quill put themselves in danger in the next thrilling adventure in the New York Times bestselling series.

The opening moves of a deadly game have begun. Jess Brightwell has put himself in direct peril, with only his wits and skill to aid him in a game of cat and mouse with the Archivist Magister of the Great Library. With the world catching fire, and words printed on paper the spark that lights rebellion, it falls to smugglers, thieves, and scholars to save a library thousands of years in the making...if they can stay alive long enough to outwit their enemies.
Rachel Caine is the New York Times, USA Today, and international bestselling author of more than 40 novels, including the Great Library series, Prince of Shadows, the Weather Warden series, the Outcast Season series, the Revivalist series, and the Morganville Vampires series.

Praise for Paper and Fire

"Made me weep, clench my fists in anger, and gape in amazement...an engaging ride from beginning to end."--Caffeinated Book Reviewer

"Dark, riveting, heart-in-the-throat storytelling, with characters who caught me up and hold me even now."--Tamora Pierce, New York Times bestselling author