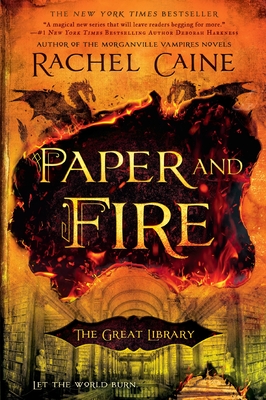 This is book number 2 in the The Great Library series.

In Ink and Bone, bestselling author Rachel Caine introduced a world where knowledge is power, and power corrupts absolutely. Now she continues the story of those who dare to defy the Great Library—and rewrite history...

Jess Brightwell has survived his introduction to the sinister, seductive world of the Library, but serving in its army is nothing like he envisioned. His life and the lives of those he cares for have been altered forever.

Embarking on a mission to save one of their own, Jess and his band of allies make one wrong move and suddenly find themselves hunted by the Library’s deadly automata and forced to flee Alexandria, all the way to London.

But Jess’s home isn’t safe anymore. The Welsh army is coming, London is burning, and soon Jess must choose between his friends, his family, and the Library, which is willing to sacrifice anything and anyone in the search for ultimate control...
Rachel Caine is the New York Times, USA Today, and international bestselling author of more than forty novels, including the Great Library series, Prince of Shadows, the Weather Warden series, the Outcast Season series, the Revivalist series, and the Morganville Vampires series.

Praise for Paper and Fire

“Paper and Fire made me weep, clench my fists in anger, and gape in amazement. It was an engaging ride from beginning to end.”—Caffeinated Book Reviewer

“This exciting, fast-paced adventure from the prolific Caine will appeal to fans of fantasy with a sense of camaraderie.”—Library Journal

“AMAZEBALLS....I love this series not for the romance, but for the friendship and sense of camaraderie, for the gorgeous imagery and sense of place, for the world building, and for the concept.”—Smart Bitches, Trashy Books

“Rachel Caine transports the reader to an imaginary future world where a Great Library controls all knowledge and the private ownership of printed books is a radical, dangerous practice....Ink and Bone launches a magical new series that will leave readers begging for more.”—#1 New York Times bestselling author Deborah Harkness

“Dark, riveting, heart-in-the-throat storytelling, with characters who caught me up and hold me even now. A don't-miss read!”—New York Times bestselling author Tamora Pierce

“Caine’s elegantly detailed descriptions bring Jess’s world to vivid life in a fast-paced, action-oriented plot that will leave readers breathlessly anticipating not just the next page but the next book in the Great Library series.”—Publishers Weekly (starred review)

“Fans will fall in love with Jess and want the next book out immediately.”—USA Today