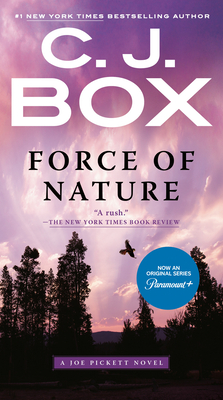 This is book number 12 in the A Joe Pickett Novel series.

Joe Pickett’s friend’s past comes back to haunt everyone he cares about in this “violent, bloody, and quite satisfying thriller”* from #1 New York Times bestselling author C. J. Box.

In 1995, Nate Romanowski was in a Special Forces unit abroad when his commander, John Nemecek, did something terrible. Now the high-ranking government official and cold-blooded sociopath is determined to eliminate anyone who knows about it—like Nate, who’s hidden himself away in Wyoming’s Bighorn Mountains. And he knows exactly how Nemecek will do it—by targeting Nate's friends to draw him out. That includes his friend, game warden Joe Pickett, and Pickett’s entire family. The only way to fight back is outside the law. Nate knows he can do it, but he isn't sure about his straight-arrow friend. And all their lives could depend on it.

ONE OF LIBRARY JOURNAL’S BEST MYSTERIES OF THE YEAR
C. J. Box is the #1 New York Times bestselling author of the Joe Pickett series, five stand-alone novels, and the story collection Shots Fired. He has won the Edgar, Anthony, Macavity, Gumshoe, and two Barry awards, as well as the French Prix Calibre .38 and a French Elle magazine literary award. His books have been translated into twenty-seven languages. He and his wife Laurie split their time between their home and ranch in Wyoming.
Praise for Force of Nature

“Perhaps the best in the series.”—San Jose Mercury News

“Violent...Those who love Box’s stunning set pieces will be in heaven.”—Booklist (starred review)

More Praise for the C. J. Box and the Joe Pickett novels

“Picking up a new C. J. Box thriller is like spending quality time with family you love and have missed...It’s a rare thriller series that has characters grow and change. An exciting reading experience for both loyal fans as well as newcomers.”—Associated Press

“Box knows what readers expect and delivers it with a flourish.”—Cleveland Plain Dealer

“Will keep you on the edge of your seat.”—The Philadelphia Enquirer