A Walk in the Words (Hardcover) 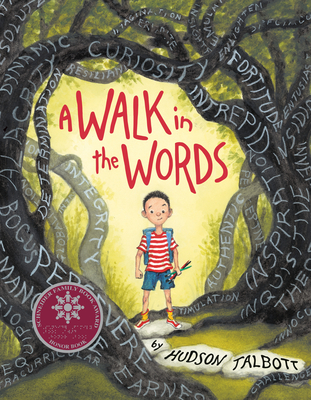 A Walk in the Words (Hardcover)


Usually Available/Ships Within 1 Week
Winner of a Schneider Family Honor!

“A beautifully rendered and deeply inspiring book for everyone who has ever read slowly—myself included! Hudson shows us the beauty and magic that can come from taking our time. Brilliant.”—Jacqueline Woodson

When Hudson Talbott was a little boy, he loved drawing, and it came naturally to him. But reading? No way! One at a time, words weren't a problem, but long sentences were a struggle. As his friends moved on to thicker books, he kept his slow reading a secret. But that got harder every year. He felt alone, lost, and afraid in a world of too many words.
Fortunately, his love of stories wouldn't let him give up. He started giving himself permission to read at his own pace, using the words he knew as stepping-stones to help draw him into a story. And he found he wasn't so alone--in fact, lots of brilliant people were slow readers, too. Learning to accept the fact that everyone does things in their own unique way, and that was okay, freed him up and ultimately helped Hudson thrive and become the fabulous storyteller he is today.
Hudson Talbott has written and illustrated more than 20 children’s books, including Newbery Honor winner Show Way (by Jacqueline Woodson), ALA Notable Book and VOYA Honor Book Leonardo’s Horse (by Jean Fritz), and We're Back! A Dinosaur's Story, which was adapted into an animated film by Steven Spielberg. He lives in the Hudson Valley of New York and in New York City.
* “With a directness similar to Jordan Scott’s I Talk Like a River, this story addresses the stigma surrounding dyslexia. . . . [Talbott] does a brilliant job of illuminating the feeling of dyslexia through his watercolor and colored pencil illustrations. . . . Leavened with humor, charm, and a child’s self-empowerment, this is an important book both for struggling readers and for classmates who need to cultivate a dose of empathy.” —School Library Journal, starred review

"Seamless interplay between the text and the art, rendered in ink, colored pencil, and watercolor, amplifies the text. . . . . Emphasizing sheer persistence as the way through, this is a personal, visually arresting read for those who may find themselves learning at a different pace. Back matter features an author’s note." —Publishers Weekly

"Expressive picture book. . . . The imaginative illustrations show a boy running from a flock of flying books, confined behind a wall of gray bricks covered in small-print words, and lost in a forest where the undulating roots and branches of trees are covered with complex terminology. An encouraging picture book for those who struggle with reading." —Booklist

“In the watercolor, colored-pencil, and ink pictures, books fly at him like so many bats or birds of prey; trees are menacingly twisted into and around words; and an entire spread of newsprint becomes a gray, densely packed 'Wall of Shame.' He feels 'alone and lost in a world of words' and worries; what if his classmates find out he can’t keep up with them? As he comes up with strategies to forge his own path . . . the illustrations’ palette slowly lightens. Then he begins to experiment with how to write stories. . . . In an appended note, Talbott relates his childhood struggle with dyslexia and how he wrote this story to help others." —Horn Book

"Expertly captures the claustrophobic crush of unknown vocabulary, first as a downpour of squiggles from the sky, then as a gnarled, dark forest with words lining the branches. . . . . Talbott excels at evincing concepts visually, and this talent is in evidence here as his protagonist first struggles then gains mastery, surfing confidently down a wave of words. Patience and curiosity (along with some fierce determination) can unlock incredible stories. A striking visual representation of how the label 'bad reader' can feel." —Kirkus Reviews