Where You Once Belonged (Vintage Contemporaries) (Paperback) 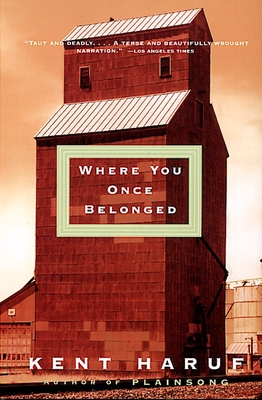 Where You Once Belonged (Vintage Contemporaries) (Paperback)


Usually Available/Ships Within 1 Week
In Where You Once Belonged, the bestselling and award-winning novelist of Eventide, Kent Haruf tells of a small-town hero who is dealt an enviable hand--and cheats with all of the cards.

Deftly plotted, defiantly honest, Where You Once Belonged sings the song of a wounded prairie community in a narrative with the earmarks of a modern American classic. In prose as lean and supple as a spring switch, Haruf describes a high school football star who wins the heart of the loveliest girl in the county and the admiration of men twice his age. Fun-loving, independent, Burdette engages in the occasional prank. But when he turns into a man, his high jinks turn into crimes--with unspeakable consequences. Now, eight years later, Burdette has returned to commit his greatest trespass of all. And the  people of Holt may not be able to stop him.
Kent Haruf is the author of five previous novels (and, with the photographer Peter Brown, West of Last Chance). His honors include a Whiting Foundation Writers’ Award, the Mountains & Plains Booksellers Award, the Wallace Stegner Award, and a special citation from the PEN/Hemingway Foundation; he was also a finalist for the National Book Award, the Los Angeles Times Book Prize, and the New Yorker Book Award. He died in November 2014, at the age of seventy-one.
"Taut and deadly. . . . A terse and beautifully wrought narration."  --Los Angeles Times

"A beautifully told parable--simple and stark and true." --Newsday

"Where You Once Belonged speaks with the authenticity of . . . Hemingway and Faulkner." --The Denver Post