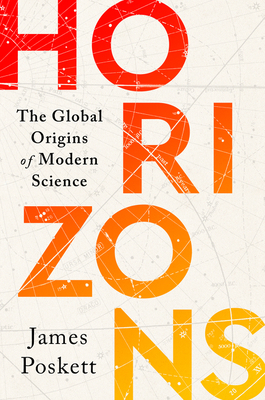 “A radical retelling… Poskett deftly blends the achievements of little-known figures into the wider history of science… The book brims with clarity.”—Financial Times

The history of science as it has never been told before: a tale of outsiders and unsung heroes from far beyond the Western canon that most of us are taught.

When we think about the origins of modern science we usually begin in Europe. We remember the great minds of Nicolaus Copernicus, Isaac Newton, Charles Darwin, and Albert Einstein. But the history of science is not, and has never been, a uniquely European endeavor. Copernicus relied on mathematical techniques that came from Arabic and Persian texts. Newton’s laws of motion used astronomical observations made in Asia and Africa. When Darwin was writing On the Origin of Species, he consulted a sixteenth-century Chinese encyclopedia. And when Einstein studied quantum mechanics, he was inspired by the Bengali physicist, Satyendra Nath Bose.

Horizons is the history of science as it has never been told before, uncovering its unsung heroes and revealing that the most important scientific breakthroughs have come from the exchange of ideas from different cultures around the world. In this ambitious, revelatory history, James Poskett recasts the history of science, uncovering the vital contributions that scientists in Africa, America, Asia, and the Pacific have made to this global story.

JAMES POSKETT is Associate Professor in the History of Science and Technology at the University of Warwick. He has written for the Guardian, Nature, and BBC History Magazine, among other publications, and was shortlisted for the BBC New Generation Thinker Award and won the Newcomer of the Year Award from the Association of British Science Writers. He lives in Warwickshire, England.

“This treasure trove of a book puts the case persuasively and compellingly that modern science did not develop solely in Europe. The well-trodden narrative that the scientific revolution began with Copernicus and Galileo, and continued through Newton, Darwin and Einstein, neglects so much. We acknowledge that science today is a truly global enterprise, but this hugely important book explains that it has ever been thus.”   — Jim Al-Khalili, author of Paradox: The Nine Greatest Enigmas in Physics

“A useful corrective that brings us closer to a more accurate history of Western science—one which recognizes Europe, not as exceptional, but as learning from the world.”  — Angela Saini, author of Superior: The Return of Race Science

“Horizons is a remarkable book that challenges almost everything we know about science in the West. Poskett brings to light an extraordinary array of material to change our thinking on virtually every great scientific breakthrough in the last 500 years… An explosive book that truly broadens our global scientific horizons, past and present.” — Jerry Brotton, author of A History of the World in 12 Maps

“A provocative examination of major contributions to science made outside Europe and the USA, from ancient to modern times, explained in relation to global historical events. I particularly enjoyed the stories of individuals whose work tends to be omitted from standard histories of science.”  — Ian Stewart, author of Significant Figures: The Lives and Work of Great Mathematicians

“The righting of the historical record makes Horizons a deeply satisfying read. We learn about a fascinating group of people engaged in scientific inquiry all over the world. Even more satisfyingly, Horizons demonstrates that the most famous scientists - Copernicus, Darwin and Einstein among them - couldn't have made their discoveries without the help of their global contacts.”  — Valerie Hansen, author of The Year 1000: When Explorers Connected the World?and Globalization Began

"From palatial Aztec botanic gardens to Qing Dynasty evolutionary theories, Horizons upends traditional accounts of the history of science, showing how curiosity and intellectual exploration was, and is, a global phenomenon.”  —  Rebecca Wragg Sykes, author of Kindred

“A wonderful, timely reminder that scientific advancement is, and has always been, a global endeavour.”   — Patrick Roberts, author of Jungle

“Science as a global project might seem like a new concept. But Poskett reveals how internationality has been the lifeblood of science through history.”  — Alice Roberts, author of Ancestors