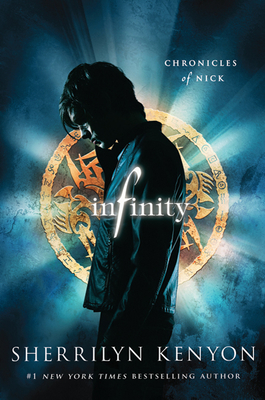 This is book number 1 in the Chronicles of Nick series.

Anything by Sherrilyn Kenyon is so great, especially her teen fiction series The Chronicles of Nick. -Dez

At fourteen, Nick Gautier thinks he knows everything about the world around him. Streetwise, tough, and savvy, his quick sarcasm is the stuff of legends. . .until the night when his best friends try to kill him. Saved by a mysterious warrior who has more fighting skills than Chuck Norris, the teenaged Nick is sucked into the realm of the Dark-Hunters: immortal vampire slayers who risk everything to save humanity.


Nick quickly learns that the human world is only a veil for a much larger and more dangerous one: a world where the captain of the football team is a werewolf and the girl he has a crush on goes out at night to stake the undead. But before he can even learn the rules of this new world, his fellow students are turning into flesh-eating zombies--and he's next on the menu.
As if starting high school isn't hard enough. . .now Nick has to hide his new friends from his mom, his chain saw from the principal, and keep the zombies and the demon Simi from eating his brains, all without getting grounded or suspended. How in the world is he supposed to do that?

New York Times bestselling author Sherrilyn Kenyon is a regular in the #1 spot. This extraordinary bestseller continues to top every genre in which she writes, including manga and graphic novels. More than 70 million copies of her books are in print in more than one hundred countries. Her current series include The Dark Hunters®, The League®, Deadman’s Cross™, Chronicles of Nick®, Hellchasers™, Mikro Chasers™, and The Lords of Avalon®. Her Chronicles of Nick® and Dark-Hunter® series are soon to be major motion pictures.

Praise for the Chronicles of Nick
“The best book in Sherrilyn Kenyon’s Chronicles of Nick so far.” –Arched Doorway on Instinct
“It does not matter if you are male or female…anyone from the ages of teen to adult would love this story. ..Tales by Sherrilyn Kenyon are major awesomeness!” –Huntress Reviews on Instinct
“Kenyon writes for a mixed audience to great success, easily maintaining the excitement, intrigue, and humor of a series that appeals to guys and girls alike.” – Booklist on Illusion
“A terrific action-packed fantasy.” –Midwest Book Review on Illusion
“I don’t know how many more ways I can gush over Nick but as long as the books keep coming, I’ll keep thinking them up.” – Paranormal Haven on Illusion
“Kenyon keeps the supernatural action careening along.” – Booklist on Infinity