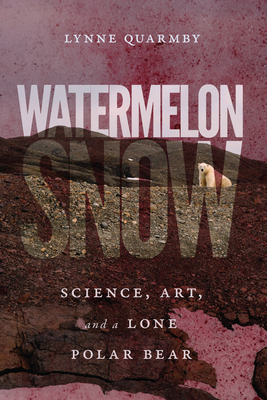 
Usually Available/Ships Within 1 Week
Concern about the climate crisis is widespread as humans struggle to navigate life in uncertain times. From the vantage of a schooner full of artists on an adventure in the high Arctic, biologist Lynne Quarmby explains the science that convinced her of an urgent need to act on climate change and recounts how this knowledge - and the fear and panic it elicited - plunged her into unsustainable action, ending in arrests, lawsuits, and a failed electoral campaign on behalf of the Green Party of Canada. Watermelon Snow weaves memoir, microbiology, and artistic antics together with descriptions of a sublime Arctic landscape. At the top of the warming world, Quarmby struggles with burnout and grief while an aerial artist twirls high in the ship's rigging, bearded seals sing mournfully, polar bears prowl, and glaciers crumble into the sea. In a compelling narrative, sorrow and fear are balanced by beauty and wonder. The author's journey back from a life out of balance includes excursions into evolutionary history where her discoveries reveal the heart of human existence. The climate realities are as dark as the Arctic winter, yet this is a book of lightness and generosity. Quarmby's voice, intimate and original, illuminates the science while offering a reminder that much about the human experience is beyond reason. Inspiring and deeply personal, Watermelon Snow is the story of one scientist's rediscovery of what it means to live a good life at a time of increasing desperation about the future.
Lynne Quarmby is professor of cell biology in the Department of Molecular Biology and Biochemistry at Simon Fraser University.
“Watermelon Snow is a powerful and evocative work … [Quarmby]’s engaging storytelling makes the book highly digestible and readable and the themes understandable. This is a work that will undoubtedly resonate with anyone interested in climate politics, science, and justice.” H-Environment

"Take a trip to the top of the world through the eyes of an impassioned scientist who experiences the unique landscape first-hand and, as an activist, mourns the loss of a frozen world that once was. This is a must-read for anyone concerned about the rapid changes taking place in the Arctic as it warms and the implications for the rest of the planet." Bob McDonald, host of CBC Radio's Quirks and Quarks

"Lynne Quarmby is the most unusual of scientists. For one thing, she can write complex science, explaining cellular biology in ways that illuminate and entertain. For another, she is brave enough to face arrest to fight a pipeline. But this book is her bravest act yet – exposing a heart of knowing pain, a heartbreaking awareness of our collective unprocessed grief." Elizabeth May, former leader, Green Party of Canada

"A powerful journey, brimming with intelligence, love, and sorrow, into the Arctic, and into the heart of the climate change battle. Watermelon Snow is a song of both love and grief, as haunting as the song of the seals that Quarmby hears on her polar voyage. Embracing science, art, activism, and the poignant creativity of humans, Quarmby evokes the almost unimaginable beauty of the polar north while calling us to be the clear-eyed witnesses the earth needs right now, to fight climate change, and to preserve the living wonders of the earth – from molecules to polar bears – before it is too late. A moving and courageous memoir." Shaena Lambert, author of Petra and Oh, My Darling

"We cannot hold in our minds for long the image of our own extinction. Lynne Quarmby's profound elegy arises from a terror we can barely articulate. Alternately lyrical and literal, her exquisitely crafted writing does not comfort us, but it restores us t