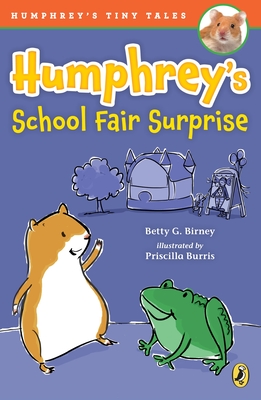 Longfellow School is having a school fair! They will have bouncy castles, bean bag games, painted faces, and delicious treats. And there's also a contest for best class spirit. Of course Mrs. Brisbane's class decides Humphrey and Og are the biggest reasons their class is so special and they make costumes and signs to show everyone why. At first it seems as though Humphrey and Og won't get to go to the fair, but luckily Aldo figures out a way to get them there safely. The fair is as wonderful as Humphrey imagined and he even ends up being the surprise star of the day.

Just-right for readers transitioning from easy-to-reads to chapter books, Humphrey's Tiny Tales simply make kids HAPPY-HAPPY-HAPPY.
Betty G. Birney has won many awards for writing for television, including an Emmy, three Humanitas Prizes, and a Writers Guild of America Award. In addition to the Humphrey and Hunphrey Tiny Tales series, she is the author of The Seven Wonders of Sassafrass Springs and The Princess and the Peabody's. She grew up in St. Louis, Missouri, where her parents grew up as neighbors on Humphrey Street.
"Birney has created the kind of series that first- and second-grade readers will love. It’s set in school, the vocabulary is accessible, the font and spacing are generous, and the frequent illustrations tie the story together. New readers will be 'HAPPY-HAPPY-HAPPY' to see this promising new series." -Kirkus Reviews on Humphrey's Really Wheely Racing Day

"This title has the same characters, humorous action, and gentle tone of the original, but the large print, short chapters, and numerous cartoon-style illustrations make this one suitable for readers new to chapter books."–School Library Journal on Humphrey's Really Wheely Racing Day