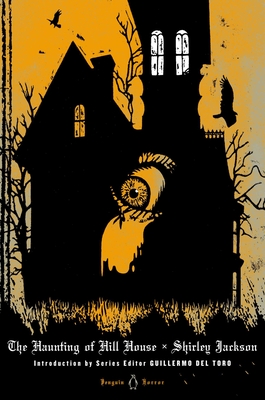 
Usually Available/Ships Within 1 Week
Part of a new six-volume series of the best in classic horror, selected by Academy Award-winning director of The Shape of Water Guillermo del Toro

Filmmaker and longtime horror literature fan Guillermo del Toro serves as the curator for the Penguin Horror series, a new collection of classic tales and poems by masters of the genre. Included here are some of del Toro’s favorites, from Mary Shelley’s Frankenstein and Ray Russell’s short story “Sardonicus,” considered by Stephen King to be “perhaps the finest example of the modern Gothic ever written,” to Shirley Jackson’s The Haunting of Hill House and stories by Ray Bradbury, Joyce Carol Oates, Ted Klein, and Robert E. Howard. Featuring original cover art by Penguin Art Director Paul Buckley, these stunningly creepy deluxe hardcovers will be perfect additions to the shelves of horror, sci-fi, fantasy, and paranormal aficionados everywhere.


The Haunting of Hill House

The classic supernatural thriller by an author who helped define the genre. First published in 1959, Shirley Jackson's The Haunting of Hill House has been hailed as a perfect work of unnerving terror. It is the story of four seekers who arrive at a notoriously unfriendly pile called Hill House: Dr. Montague, an occult scholar looking for solid evidence of a “haunting;' Theodora, his lighthearted assistant; Eleanor, a friendless, fragile young woman well acquainted with poltergeists; and Luke, the future heir of Hill House. At first, their stay seems destined to be merely a spooky encounter with inexplicable phenomena. But Hill House is gathering its powers—and soon it will choose one of them to make its own.
Shirley Jackson (1916–1965) received wide critical acclaim for her short story "The Lottery," which was first published in the New Yorker in 1948. Her novels include We Have Always Lived in the Castle, The Sundial, and The Haunting of Hill House.

Guillermo del Toro is a Mexican director, producer, screenwriter, novelist, and designer. He both cofounded the Guadalajara International Film Festival and formed his own production company—the Tequila Gang. However, he is most recognized for his Academy Award-winning film, Pan’s Labyrinth, and the Hellboy film franchise. He has received Nebula and Hugo awards, was nominated for a Bram Stoker Award, and is an avid collector and student of arcane memorabilia and weird fiction.

“The new Penguin Horror editions, selected by Guillermo del Toro, feature some of the best art-direction (by Paul Buckley) I've seen in a cover in quite some time.” – Cory Doctorow, Boing Boing

"Each cover does a pretty spectacular job of evoking the mood of the title in bold, screenprint-style iconography." – Dan Solomon, Fast Company