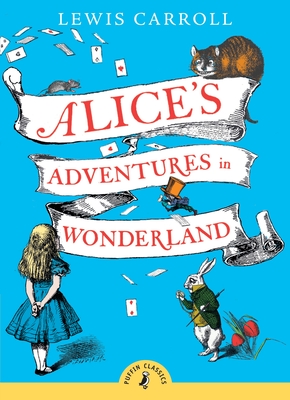 “This illustration-driven edition of the classic tale appeals to booklovers of all ages. The perspective and design provide a satisfying experience for both the reader and the collector.”
— Camille DeBoer, Pooh's Corner, Grand Rapids, MI

I will ALWAYS recommend this book forever and ever. It shows how being curious in our everyday life can lead to adventures that grow us in ways we wouldn't expect. Plz read. -Nick

— From Cream & Amber Customer Picks
They're Puffin Classics for a reason, it's because they're the best.

Follow Alice down the rabbit hole in this topsy turvy adventure!

On an ordinary summer's afternoon, Alice tumbles down a hole and an extraordinary adventure begins. In a strange world with even stranger characters, she meets a rabbit with a pocket watch, joins a Mad Hatter's Tea Party, and plays croquet with the Queen! Lost in this fantasy land, Alice finds herself growing more and more curious by the minute . . .
Lewis Carroll, born Charles Lutwidge Dodgson (1832-98), grew up in Cheshire in the village of Daresbury, the son of a parish priest. He was a brilliant mathematician, a skilled photographer and a meticulous letter and diary writer. Alice's Adventures in Wonderland, inspired by Alice Liddell, the daughter of the Dean of Christ Church in Oxford, was published in 1865, followed by Through the Looking-Glass in 1867. He wrote numerous stories and poems for children including the nonsense poem The Hunting of the Snark and fairy stories Sylvie and Bruno.

“Publishers are having a creative field day with stunningly beautiful new covers—and lovely insides, too, in the case of Puffin’s whimsical Alice’s Adventures in Wonderland, illustrated by Rifle Paper Co.’s Anna Bond.”—Entertainment Weekly

“Chic…The pretty face of Anna Bond’s Alice looks continually astonished, and even in the scene where her neck grows freakishly serpentine, the heroine remains comely. Elegant and unthreatening, Ms. Bond’s pictures abound with so many flowers and curling vines that Wonderland seems a much nicer place than perhaps we remembered.”—Wall Street Journal

“In this beautiful, oversized, hardcover anniversary edition—with the complete, unabridged text—readers will fall in love all over again with the classic tale of the girl who fell down the rabbit hole. Illustrator Anna Bond, of gift and stationery brand Rifle Paper Co., applies her stylish, whimsical touch and distinctive color palette to Alice and her friends, from the inviting jacket and the case-cover art beneath it to the original endpapers and the superb full-color interior illustrations, large and small.” —Shelf Awareness

“This year marks the 150th anniversary of Lewis Carroll’s beloved classic, Alice’s Adventures in Wonderland. Commemorate the occasion with a deluxe hardcover edition of the tale from Puffin Books, available Oct. 27. The new book is re-illustrated with vibrant, whimsical designs by Anna Bond of Rifle Paper Co., for a one-of-a-kind look at Alice’s imaginative journey.”—American Profile