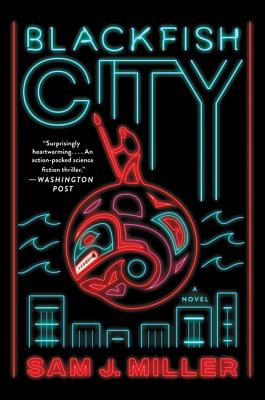 A satisfying, strange, sea-floating dystopian world is at the center of this sci-fi book. The story hits all the right notes - interwoven character perspectives, suspenseful action, and myths come to life. I loved it!

“One of the most intriguing future cities in years.” —Charlie Jane Anders

“Simmers with menace and heartache, suspense and wonder.” —Ann Leckie

A Best Book of the Month in

After the climate wars, a floating city is constructed in the Arctic Circle, a remarkable feat of mechanical and social engineering, complete with geothermal heating and sustainable energy. The city’s denizens have become accustomed to a roughshod new way of living, however, the city is starting to fray along the edges—crime and corruption have set in, the contradictions of incredible wealth alongside direst poverty are spawning unrest, and a new disease called “the breaks” is ravaging the population.

When a strange new visitor arrives—a woman riding an orca, with a polar bear at her side—the city is entranced. The “orcamancer,” as she’s known, very subtly brings together four people—each living on the periphery—to stage unprecedented acts of resistance. By banding together to save their city before it crumbles under the weight of its own decay, they will learn shocking truths about themselves.

Sam J. Miller is the Nebula-Award-winning author of The Art of Starving (an NPR best of the year) and Blackfish City (a best book of the year for Vulture, Entertainment Weekly, and more). A recipient of the Shirley Jackson Award and a graduate of the Clarion Writers’ Workshop, Sam's short stories have been nominated for the World Fantasy, Theodore Sturgeon, and Locus Awards, and reprinted in dozens of anthologies. A community organizer by day, he lives in New York City.

“Immersive sci-fi with a poetic edge. . . . The book thrills with its meticulous world-building while also providing great characters, inclusive representation, and hard-hitting themes.” — Entertainment Weekly, Best of 2018 So Far

“An urgent tale imploring us to look at the ties between technology, race, gender and class privilege. . . . Surprisingly heartwarming. . . . An action-packed science fiction thriller.” — Washington Post

“Impressive. . . . Fabulous. . . . We tend to label almost any future city as dystopian, but the term hardly does justice to Miller’s complex society.” — Chicago Tribune

“Vividly brought to life. . . . Miller excels at depicting a metropolis bursting at the seams and populated by both refugees and the elite. Blackfish City is a compelling dystopian thriller.” — The Guardian

“Blackfish City feels like a place I’ve never seen in a story before, but I came away feeling as though I’d lived there forever. One of the most intriguing future cities in years.” — Charlie Jane Anders

“This is the kind of swirling, original sci-fi we live for.” — B&N Sci-Fi Fantasy Blog

“A timeless story of rebellion against a corrupt master, giving it a kind of Hunger Games resonance that reaches beyond any genre boundaries. Miller is a graceful writer.” — Booklist

“A floating Arctic city; nano-bonded orcas and polar bears; an Earth violently reshaped by the mistakes we’re making right now… I haven’t been this swept away by imagination and worldbuilding since Philip Pullman’s His Dark Materials. A gorgeous, queer, muscular novel.” — Carmen Maria Machado, National Book Award-nominated author of Her Body and Other Parties

“A wildly inventive post-cyberpunk ride that also has real things to say about community and family. Sam Miller’s drowned future is vivid and fully real, even as he throws in the weird and the fantastic. Sam Miller is a fiercely strong writer, and this book is a blast.”  — Daryl Gregory, World Fantasy Award-winning author of Spoonbenders

“Blackfish City is an exhilarating tour of a post-catastrophe future that’s both fantastical and eerily convincing. Imagine The Yiddish Policeman’s Union cross-bred with Snowcrash and you’ll get an inkling of the imaginative horsepower on display here.” — Adam Sternbergh, author of The Blinds

“Miller gives us an incisive and beautifully written story of love, revenge, and the power (and failure) of family in a scarily plausible future.  Blackfish City simmers with menace and heartache, suspense and wonder.” — Ann Leckie, New York Times bestselling and Hugo, Nebula, and Clarke Award-winning author of Ancillary Justice