Kicking & Dreaming: A Story of Heart, Soul, and Rock and Roll (Paperback) 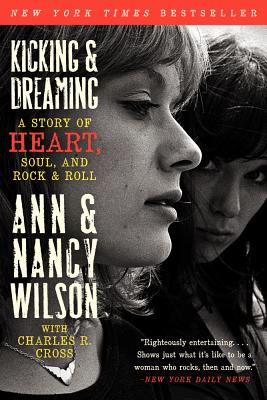 The story of Heart is a story of heart and soul and rock ’n’ roll. Since finding their love of music and performing as teenagers in Seattle, Washington, Ann Wilson and Nancy Wilson, have been part of the American rock music landscape. From 70s classics like “Magic Man” and “Barracuda” to chart- topping 80s ballads like “Alone,” and all the way up to 2012, when they will release their latest studio album, Fanatic, Heart has been thrilling their fans and producing hit after hit. In Kicking and Dreaming, the Wilsons recount their story as two sisters who have a shared over three decades on the stage, as songwriters, as musicians, and as the leaders of one of our most beloved rock bands. An intimate, honest, and a uniquely female take on the rock and roll life, readers of bestselling music memoirs like Life by Keith Richards and Steven Tyler’s Does the Noise in My Head Bother You? will love this quintessential music story finally told from a female perspective.

Ann & Nancy Wilson are the leaders of the rock band Heart, whose albums have sold thirty-five million records worldwide. They continue to tour all over the world. In 2013, they were inducted into the Rock and Roll Hall of Fame.

Ann & Nancy Wilson are the leaders of the rock band Heart, whose albums have sold thirty-five million records worldwide. They continue to tour all over the world. In 2013, they were inducted into the Rock and Roll Hall of Fame.

“Righteously entertaining….[it] shows just what it’s like to be a woman who rocks, then and now.”
— New York Daily News

“Sisters Ann and Nancy Wilson—better known as the faces and voices of Heart—look back on the personal and professional struggles and triumphs that define their legacy as one of rock’s pioneering female-fronted, creatively autonomous acts.”
— USA Today

“Thorough and entertaining….[Kicking and Dreaming is] satisfying for its breadth and spirit….the Wilsons write movingly and with a sense of humor.”
— Miami Herald