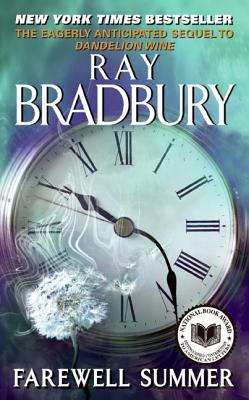 Ray Bradbury does it again with this quick read full of adventure, growing pains, and discovering how to move and love in an everchanging world.

The master of American fiction returns to the territory of his beloved classic, Dandelion Wine—a sequel 50 years in the making

October 1st, the end of summer. The air is still warm, but fall is in the air. Thirteen-year-old Douglas Spaulding, his younger brother Tom, and their friends do their best to take advantage of these last warm days, rampaging through the ravine, tormenting the girls . . . and declaring war on the old men who run Green Town, IL. For the boys know that Colonel Quartermain and his cohorts want nothing more than to force them to put away their wild ways, to settle down, to grow up. If only, the boys believe, they could stop the clock atop the courthouse building. Then, surely, they could hold onto the last days of summer . . . and their youth.

But the old men were young once, too. And Quartermain, crusty old guardian of the school board and town curfew, is bent on teaching the boys a lesson. What he doesn’t know is that before the last leaf turns, the boys will give him a gift: they will teach him the importance of not being afraid of letting go.

In a career spanning more than seventy years, Ray Bradbury inspired generations of readers to dream, think, and create. A prolific author of hundreds of short stories and close to fifty books, as well as numerous poems, essays, operas, plays, and screenplays, Bradbury was one of the most celebrated writers of our time. His groundbreaking works include Fahrenheit 451, The Martian Chronicles, The Illustrated Man, Dandelion Wine, and Something Wicked This Way Comes. An Emmy Award winner for his teleplay The Halloween Tree and an Academy Award nominee, he was the recipient of the 2000 National Book Foundation Medal for Distinguished Contribution to American Letters, the 2004 National Medal of Arts, and the 2007 Pulitzer Prize Special Citation, among many honors.

“An intriguing coda to one of Bradbury’s classics. ”
— Kirkus Reviews

“A touching meditation on memories, aging, and the endless cycle of birth and death.”
— Booklist